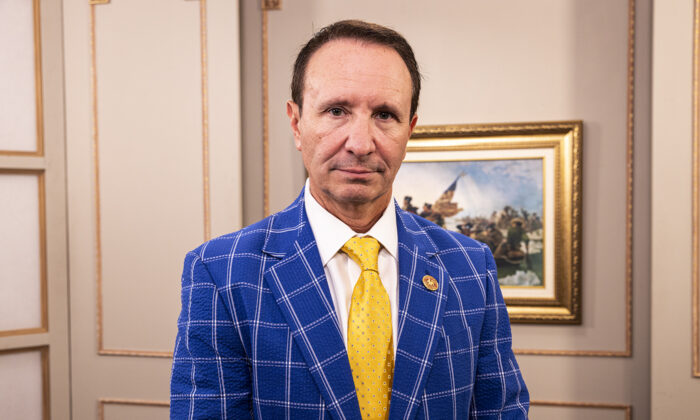 Taking on Big Tech and the Federal Government

“What we found, and what the whistleblowers found, was that the government and the White House were directly communicating with Big Tech on stories and information they either wanted to promote or suppress,” says Louisiana Attorney General Jeff Landry.

On a recent episode of EpochTV’s “American Thought Leaders,” host Jan Jekielek and Landry discuss assaults on the First Amendment by government and Big Tech. One of the most assertive attorneys general in the country, Landry has filed a number of lawsuits against the Biden administration over Big Tech censorship, the Biden administration’s Disinformation Governance Board, COVID-19 mandates, illegal immigration, and election integrity.

Jan Jekielek: In May, you signed on with 19 different attorneys general against the establishment of this disinformation board, what some people call a Ministry of Truth, in the U.S. government. You sent a letter saying, “This kind of board cannot stand.” This is a big issue, correct?

Attorney General Jeff Landry: It’s extremely troublesome when you have the federal government creating a disinformation board. That’s a prima facie violation of the First Amendment. Think about it. This is government that is going to filter information to the American people. They are basically going to ensure that some information gets out and some information doesn’t.

Mr. Jekielek: There’s a lot of disinformation. Everyone will agree on that these days. So, what do we do about that?

Mr. Landry: The greatness about America was that information could flow freely between people. The citizenry could ascertain truth from fiction and then come up with their own decisions based upon that information. Recently, the government has decided, “There’s some information we don’t want the public to know.” That’s concerning, especially when that information ends up being correct.

That’s why you saw attorneys general, like myself, go after the government the minute they announced this, saying, “This is an incorrect use of federal authority.”

Mr. Jekielek: Not too long after, you and Attorney General Eric Schmitt in Missouri decided to launch a lawsuit looking at Big Tech and government colluding to censor.

Mr. Landry: That lawsuit was instituted within 24 hours of the letter. Schmitt and I believe that if the government is censoring speech, then it’s violating your First Amendment rights. This was our theory. So if the government coerces or works with Big Tech and says, “We want you to censor this information,” and Big Tech does that, then Big Tech becomes a government actor and is violating citizens’ constitutional rights. That was the legal theory we had in play.

Mr. Jekielek: What is the substance of the lawsuit? Please explain it to me.

Mr. Landry: Let’s think about it in a criminal context. We all are familiar with Fourth Amendment search and seizure. The police can’t barge into your home to search for things. They have to have a reasonable belief that there is evidence connected to a crime.

Then, they have to go before a judge and say, “Judge, under these conditions, this is the information we have.” Then the judge says, “OK, this is enough for a warrant to be granted.” That’s a Fourth Amendment protection.

That’s illegal. That’s the government short-circuiting the Fourth Amendment. It’s the same thing with speech, and that’s what our lawsuit says about Big Tech and government. If we find this collusion to be true, then those platforms will be liable for violating citizens’ rights.

Mr. Jekielek: What examples did you find? Where were the specific areas? You suggested a lot of things around COVID.

Mr. Landry: What we found, and what the whistleblowers found, was that the government and the White House were directly communicating with Big Tech on stories and information they either wanted to promote or suppress.

We have a treasure trove of information that should come out shortly. The good news is that the judge in our case granted our motion for discovery, so the subpoenas have gone out. Dr. Anthony Fauci got served, along with other members of the president’s Cabinet. They have to send us the communications between them and the platforms. We believe we’ll find communications telling the platforms what they should and shouldn’t put out.

Mr. Jekielek: But you weren’t only looking at COVID-related issues in this lawsuit, correct?

Mr. Landry: It’s not only those issues. Think about the suppression of the Hunter Biden laptop and Russiagate with its dossier. We’re seeing a disturbing pattern of the government taking information that’s fictitious and then making it a fact. Then, they try to hide the cover of that false story from the American people. They use the power of these Big Tech companies to limit the information the American people are getting.

Think about how the federal government spied on a presidential campaign. The basis for which they did so was a false document, the dossier. Again, when the evidence showing that dossier as fictitious tried to come out, that information was suppressed.

Mr. Jekielek: Right now, there’s much less appreciation of the value of freedom of speech than there once was. Once, it was sacrosanct. Now people are talking about balancing these things.

We have this technology that can create big narratives of information and can change in a moment’s notice. With the information landscape changing so much, people are arguing that new rules are required to balance these capabilities with freedom. We wouldn’t want the wrong information to capture everyone’s mind in an instant. Things like that have happened.

Unfortunately, the virtual public square is now controlled by just a handful of private corporations—Big Tech, as we’ve labeled them. Instead of the Bill of Rights and the First Amendment being the gateway of that information, Big Tech now controls what goes in and out of the virtual public square. And when the government joins them, they are absolutely violating the First Amendment when it comes to information.

That’s where we are right now. What has happened is a collision of antitrust law, the monopolistic power of Big Tech, and what people believe and appreciate about the First Amendment.

Mr. Jekielek: It seems to take the states to challenge the federal government.

What you’re seeing right now are attorneys general either trying to bring the federal government in check or trying to expand it, based upon their ideology.

Mr. Jekielek: I’ll be watching to see what you come up with out of the Louisiana attorney general’s office.

Mr. Landry: This case against the Biden administration and the Cabinet members whom we’ve subpoenaed is going to be interesting. We can peel back the layers of that discovery and the public can watch. Schmitt and I are excited to litigate that case, and I hope that you all stay on top of it.