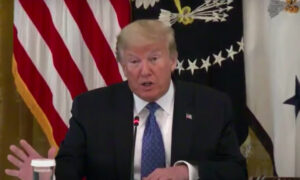 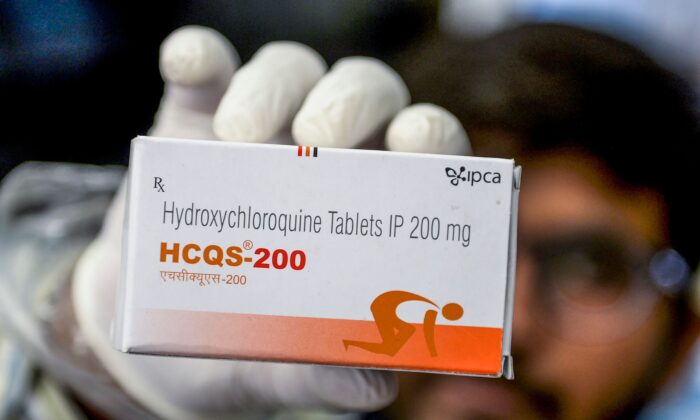 A pharmacist displaying a box of hydroxychloroquine (HCQ) tablets in his store in Hyderabad, India, on April 28, 2020. (Noah Seelam/AFP via Getty Images)
US News

Taking Hydroxychloroquine ‘Ultimately a Decision Between a Patient and Their Doctor:’ FDA

A day after President Donald Trump admitted to taking a regimen of hydroxychloroquine and zinc to lower his COVID-19 risk, the Food and Drug Administration (FDA) appeared to soften its stance on widespread use of the anti-malarial drug, saying the decision should be made by a patient and their doctor.

“The decision to take any drug is ultimately a decision between a patient and their doctor,” FDA Commissioner Stephen Hahn told The Hill in a statement on Tuesday. “Hydroxychloroquine and chloroquine are already FDA-approved for treating malaria, lupus, and rheumatoid arthritis.”

The FDA last month cautioned against using hydroxychloroquine and chloroquine to treat COVID-19, the disease caused by the CCP (Chinese Communist Party) virus, outside hospital or ongoing clinical trial because of sometimes-fatal side effects. The agency said the drug can cause abnormal heart rhythms or create a rapid heart rate.

“Hydroxychloroquine and chloroquine can cause abnormal heart rhythms such as QT interval prolongation and a dangerously rapid heart rate called ventricular tachycardia,” the FDA said in an April 24 statement.

Regulators issued the alert, in part, based on increased reports of dangerous side effects called in to U.S. poison control centers.

Calls to centers involving hydroxychloroquine increased last month to 96, compared with 49 in April 2019, according to data from the American Association of Poison Control Centers provided to The Associated Press. It was the second month of elevated reports involving the drug, following 79 calls in March. The problems reported included abnormal heart rhythms, seizures, nausea, and vomiting.

The president’s physician, Sean Conley, confirmed Monday in a letter released by the White House that he and Trump decided that he should take the drug as “the potential benefit from treatment outweighed the relative risks.”

Conley did not disclose in his letter how long the president had been taking the drug for, or what his current dosage is.

Just hours earlier, Trump said during a roundtable event at the White House that he had been taking hydroxychloroquine daily as a preventative measure for about a week and a half.

The drug, which has been on the market for decades, has been touted by Trump as a possible treatment in fighting the CCP virus, a novel coronavirus that emerged last year in Wuhan, China.

“I happen to be taking it,” Trump told reporters Monday. “A lot of good things have come out. You’d be surprised at how many people are taking it, especially the frontline workers.”

Both Pence and Trump were subsequently tested for the virus, and both were cleared.

“The president is in very good health and has remained symptom-free,” Pence wrote. “He receives regular COVID-19 testing, all negative to date.”

Trump said he consulted Conley on taking the drug to the president, after which Conley did not object to prescribing it.

“In consultation with our inter-agency partners and subject matter experts around the country, I continue to monitor the myriad studies investigating potential COVID-19 therapies, and I anticipate employing the same shared medical decision-making based on the evidence at hand in the future,” the presidential physician added.

There have been several clinical trials to see whether the drug is effective in fighting the virus. A recent study conducted by New York University’s School of Medicine found that a combination of hydroxychloroquine and zinc has been effective in some virus patients.

And a new trial evaluating the combination of hydroxychloroquine and azithromycin against the virus has started, Dr. Anthony Fauci, a member of the White House pandemic task force, announced last week.

The president defended his use of the drug on Tuesday, after medical experts raised concerns that his announced use of the drug against COVID-19 could spark wide misuse by Americans.

White House Press Secretary Kayleigh McEnany told reporters at the White House that she had spoken with the FDA’s Hahn about hydroxychloroquine.

“He told me that it has a good safety profile but should always be prescribed in the context of a doctor prescribing it to their patient, so that is ultimately how the decision should be made,” McEnany said Tuesday. “It’s ultimately how President Trump made his decision.