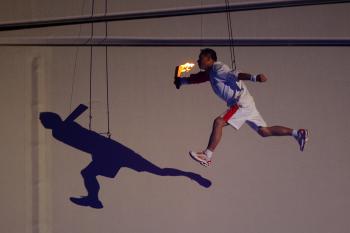 HUNG UP: Li Ning, former Olympic gymnast for China flys through the air on his way to lighting the Olympic Flame during the Opening Ceremony for the 2008 Beijing Summer Olympics at the National Stadium on August 8, 2008 in Beijing, China. (Phil Walter/Getty Images)
Opinion

Monika Weiss
biggersmaller
Print
The long-anticipated opening ceremony at the Olympics has come and gone. Millions of viewers worldwide were impressed by the plethora of participating masses of humanity, the lights, and the energy. The cost for all this approximately US$40 billion!

More than a thousand rockets were launched to disperse clouds that permitted an undisturbed staging of the ceremony in glowing pictures.

Several commentators around the globe hailed this as the most spectacular ceremony ever at an Olympics, and many saw this as an enfolding of Chinese culture. But there were pensive voices, such as the voice of Sandra Maischberger, commentator for ARD [German Radio]. She detected among all this "A cool draft of perfection." The lighting of the torch brought the following comment: "Many call this the Flame of Shame."

The most spectacular opening of any Olympics? Perhaps from a theatrical perspective. But, Chinese culture? Sadly, no! Does this reply surprise you? Many would have been pleased at the presentation of Chinese history, painting, the printing arts, the opera and Tang-drumming, but were presented with the performances of thousands of drilled participants. Most of these "actors" were unmistakably members of the military, something quite evident. What does this have to do with the roots of 5,000 years of Chinese culture?

The ceremony included certain forms familiar to traditional Chinese culture, but where was the deeper meaning?

Form can deceive. One NBC commentator is not alone in his opinion that modern Chinese culture does not value individuals but merely the masses, exactly as it was presented in the stadium. What a conclusion!

Chinese tradition portrays peoples' interaction from one to another in their thought processes, as well as their connectedness to Heaven and Earth. In this sense Chinese culture stands for community; it is geared for that and thus humane and modest. Did the ceremony evoke modesty? True Chinese culture and philosophy derives its greatness from modesty. What was presented this past week instead? The airings showed images of children and youth who were tormented, performing for top results in the events.

Tool of the Mighty

Where was the evidence of a genuine community spirit? Was it not replaced with what some have called "grand production?" One did not see the traditional Chinese concept of community, but Communist propaganda showcasing the masses where the individual is made to fit in, in cooperation with state authority, and not in relationship to other individuals or their connectedness to Heaven and Earth. This format represents an instrument of power in the hand of the mighty, who are merely latecomers in China’s history.

The combination of drums and highly planned, detailed technological trickery may have mesmerized the onlookers. In reality, the show's planners had achieved their goal – to conduct a visual stranglehold on the viewers. But the essence of Chinese culture is opposite the emergence of power, based on a system of moral principles, such as the quest for truth, compassion and tolerance, and Buddhism and Daoism's golden teachings.

People were fascinated by the synchronized, highly trained masses the images portrayed – be it the 897 young men as a Chinese symbol in a "printer's box," or the supposed 2008 Wu Shu fighters. What would have prompted the German radio commentator to state, "The mood in the stadium is discordant?" She offered her own answer, "The harmony between man and nature has diminished in Chinese society during the last 30 years."

The loss was evident, provided one allowed oneself to sense something amiss before this monstrous presentation!

Chinese bloggers likewise bemoaned the lack of morals; called this show something that cannot move people's minds and hearts; and other such similar, frequent comments.

How could technique replace divine powers? Could one still detect the virtue of modesty in the superlatives artistic director Li Yimou presented? Li Ning took the torch for the final relay "hovering," supported by cables in hurried steps along the virtual stadium wall, concentrating, without a smile, as a well-drilled body should do.

The lighting of the huge torch, 64 meters above the ground, seemed no longer an act of joy, but merely someone doing his duty. Was that the kind of image the TV audience had anticipated? It was nothing but control to the last step, control of the masses along the lines of the old guard, without consideration for China's true roots and perhaps providing a glimpse of a coming era of robots.

Chinese still have a choice.