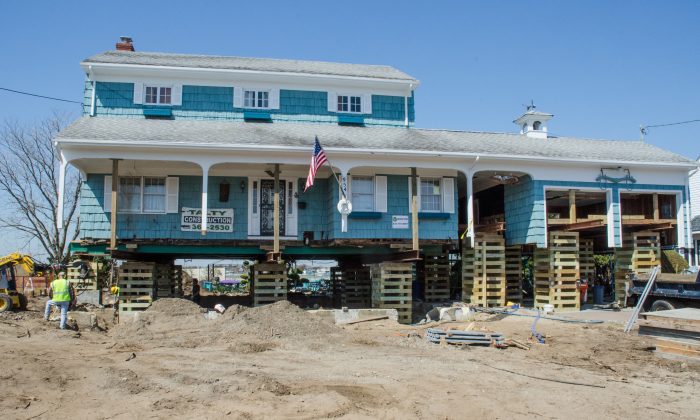 After the storm surge from Hurricane Sandy flooded their house with 5 feet of water, the homeowners made the decision to elevate their house above the new flood level of 12 feet determined by New York State and FEMA in Freeport, N.Y., May 20. (Kenneth Wilsey/FEMA)
New York

NEW YORK—For homeowners, landlords, and tenants in New York City whose homes were damaged or destroyed by Superstorm Sandy, the rebuilding can finally begin.

A new program called NYC Build it Back, which the city rolled out on June 3, will provide the means to award federal aid for those with damaged homes.

“It has been a long, difficult stretch and today is a day where people can begin the process of taking back control of their lives,” City Council member Jimmy Oddo said following the program’s announcement.

Those eligible for help will have four pathways to recovery: repair, rebuild, reimbursement, or acquisition, and will be assigned a housing recovery specialist who will walk them through the complex process.

The plan for NYC Build it Back is infused with lessons learned from Hurricane Katrina, which devastated New Orleans in 2005. In January of this year City Council members Vincent Ignizio and Oddo, as well as staff from the mayor and speaker’s offices, ventured down South to hear from elected officials about the trials the Big Easy encountered during their recovery.

“We have the fortune of being able to look at the lessons they had to learn the hard way,” a spokesman for the housing recovery office said.

The New York recovery team decided to keep it simple, according to the spokesman. Under NYC Build it Back, homeowners provide the amount of FEMA money and insurance claims they have already received, and subtract it from the total cost of the rebuild. The program is designed to fill in the gap of the unmet needs.

In January, Cuomo vowed to offer buyouts to homeowners affected by Sandy who did not want to go through the hassle of rebuilding. At the time, the governor wanted to keep the land as open space to act as a barrier for future storms, however, Mayor Michael Bloomberg wanted an option to redevelop.

Using lessons learned from their trip to New Orleans, city officials decided that it would provide an option to homeowners to allow the city to acquire unwanted property.

The land would most likely be owned by the city, according to the spokesman, adding that the city would pay for all maintenance on undeveloped land.

Land earmarked for redevelopment would remain under the city’s control until it is turned over to a developer, although the community may be able to pitch in ideas and help decide the fate of the land, said the spokesman.

Council members Oddo and Ignizio, who met with the Louisiana Land Trust during their visit, liked the idea of rebuilding some areas. The trust is a nonprofit organization formed to manage the properties purchased by the state under the Road Home Program.

“We should be able to acquire that, potentially raise the entire block in that area to grade and then build a new, more resilient housing stock,” Oddo said. “People born and raised in Midland Beach should have a right to live in a better housing stock in Midland Beach, which is why the acquisition program is so important.”

Oddo said he understands for some, the wait to rebuild may be too long, and acquisition may be the best route, but the results will be the best for the community as a whole.

Jack Suben, an architect who lost his home in Sea Gate, Brooklyn, hasn’t had a chance to sign up for the new program yet, but he plans to. He is still uncertain about which route will be best for him.

“These are not easy questions,” said Suben. “But I can’t walk away from it right now.” For now, he is leaning in the direction of rebuilding because he doesn’t think the gated community of Sea Gate will be eligible for acquisitions.

“Rebuilding is probably the most realistic for me because I love the community and want to live there,” Suben said. “I would like the opportunity to design my dream home.”

Deputy Mayor Cas Holloway said he expects the first payments to homeowners to be made before the end of the year. Some think that the level of progress in just over half a year is encouraging.

“Everyone seems to be moving in the right direction,” said Richard T. Anderson, President of NY Building Congress. “All the organizations are trying to do the right thing. Yes, it is taking a long time, but optimal is in eye of beholder.”

Genevieve Belmaker contributed to this report.