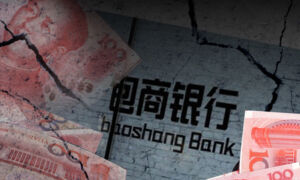 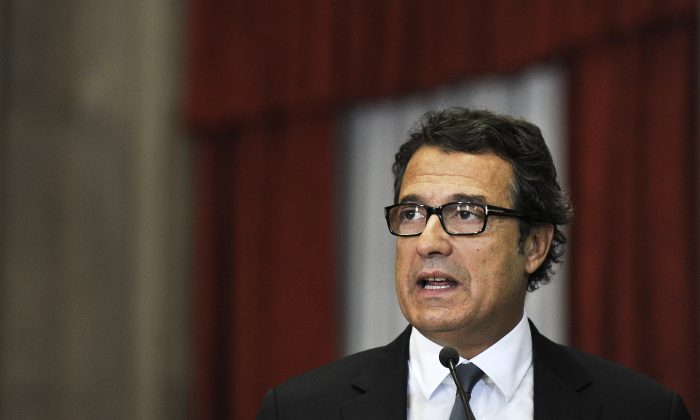 In this file photo from 2011, Head of Energias de Portugal (EDP) Antonio Mexia speaks during the signing of the contract for the minority share purchase of EDP by China Three Gorges Corp. (Patricia de Melo Moreira/AFP/Getty Images)
China Business & Economy

A bid to take over Portugal’s biggest utility firm Energias de Portugal (EDP) by a Chinese state-owned company could have reverberations across Europe and North America.

The Beijing-based China Three Gorges Corp. announced on May 11 that it launched a 9 billion euro ($10.9 billion) all-cash bid to buy out EDP. Three Gorges had already owned a 23 percent stake in the firm prior to the takeover attempt.

The offer represents a small 5 percent premium over EDP’s May 10 closing stock price, and it values the whole firm at a net 11.8 billion euros of debt.

A buyout bid of EDP isn’t surprising, as the company has been rumored to be a target for acquisition for years, including from European rivals such as France’s Energie and Spain’s Gas Natural. Over the last two years, Three Gorges had steadily increased its shareholder ownership in the company in anticipation of a takeover. Another Chinese state-owned investment company, CNIC, owns 5 percent of EDP, giving China a 28 percent total ownership prior to the latest bid.

EDP is an integral part of Portugal’s energy and business infrastructure. It’s not only Portugal’s biggest company by assets, it’s also the country’s biggest power generator, distributor, and grid operator. EDP also has assets in Brazil, United States, and Spain.

The deal will require approval in Portugal as well as the United States, where EDP owns a large portfolio of solar and wind generation assets. Reuters reported that Portuguese Prime Minister Antonio Costa told reporters on May 11 that “[the Portuguese] government has nothing against it, no reservations” regarding the deal.

If the EDP deal consummates, it will represent the latest in a series of asset purchases by Chinese companies in Portugal.

Years of budgetary and financial mismanagement at these companies have played right into the hands of the Chinese. Chinese firms have been gobbling up assets since Portugal’s 2010–2013 debt crisis, buying up companies on the cheap across insurance, banking, and infrastructure industries. In recent years, China has taken advantage of privatization efforts in the utilities and transportation infrastructure sectors.

Besides companies, Portugal offers so-called “golden visas” (Residence Authorization for Investment) to foreign individuals. Anyone investing around 350,000 euros or purchasing property for 500,000 euros would receive permanent residence in the southern European country.

For capital-starved Portugal, the deals are almost Faustian. The Chinese Communist Party (CCP) wants to extend its influence abroad—especially in Europe and North America—and much of its foreign direct investments more serve political purposes than economic.

To wit, a small and little-discussed passage within the conclusions of the June 2017 European Council summit underscores the increasing political influence Beijing wields within certain European nations.

“The protectionist language appeared in early drafts but did not make it into the summit’s final conclusions,” Politico reported. “Instead, it was replaced with watered-down wording welcoming an existing Commission initiative to ‘analyze investments from third countries in strategic sectors.’”

This small change effectively lowered the hurdle for Chinese and other foreign companies to acquire European companies within strategic and sensitive sectors.

Representatives from a coalition of smaller EU nations, including Portugal, Czech Republic, and Greece, apparently rejected the initial proposals. Sweden also opposed it, which “could be linked to the fact that Sweden’s two big carmakers are owned by Chinese investors,” Swedish MP Said Abdu told the magazine.

Three Gorges’ bid for EDP requires approval from the Committee on Foreign Investment in the United States (CFIUS), which will serve as a litmus test for Washington’s appetite for future Chinese acquisitions.

DEP owns substantial wind and solar power generation assets in the United States, which represented 65 percent of all new investments made in 2017 by EDP’s renewable energy arm, according to a Reuters report.

Renewable energy is at the intersection of energy and technology, two sectors attracting the most outbound investment by Chinese companies.

Beijing’s “Made in China 2025” program is a blueprint for China’s plan to dominate high-technology manufacturing and research in advanced industries such as artificial intelligence, robotics, new energy, and aviation and aerospace.

Part of that plan is to acquire foreign companies already developing such technologies. In 2017, Chinese companies invested a total of $29.4 billion in U.S. assets, according to Rhodium Group data. Those figures are a 35 percent decline from 2016 largely due to Chinese capital controls and increased U.S. screening of acquisitions by CFIUS, especially during the Trump presidency.

Probably the biggest acquisition scuttled by CFIUS was the proposed buyout of Lattice Semiconductor by Chinese investment firm Canyon Bridge Capital. Reasons cited by Washington included the transfer of intellectual property and the use of Lattice products by the U.S. government.

In February, CFIUS even rejected an investment by a Chinese investment fund into Xcerra Corp., a U.S.-based semiconductor testing company that doesn’t manufacture or design semiconductors.