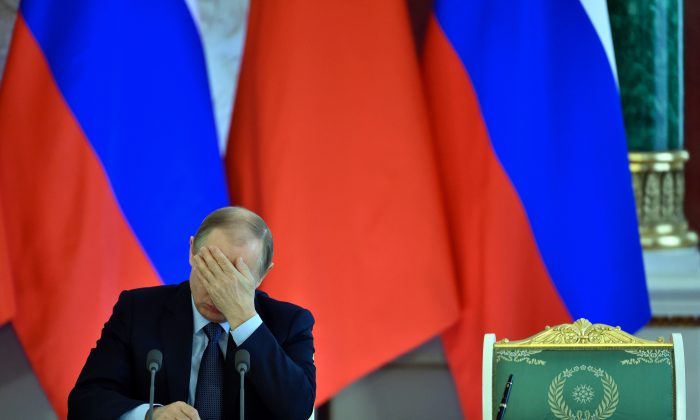 Russian President Vladimir Putin at the Kremlin in Moscow on May 8, 2015. (Kirill Kudryavtsev/AFP/Getty Images)
Business & Economy

Take Your Money and Run: Russians and Ukrainians Invest Their Funds in the US

When we hear about rich people from the former Soviet Union, we first think about corruption.  And yet, it’s real economic problems in Russia and Ukraine that are pushing legitimate business people to invest in the United States.

“We ask for documentation: Proof of income, proof of taxes paid. How the client claims the money was made. We ask them for their Russian tax return. If you report $500,000 of income I would be shocked if you could afford a $50 million apartment,” says Marlen Kruzhkov, an attorney with Gusrae Kaplan, which has a lot of clients from Eastern Europe and Russia.

Many of our clients who were making substantial money in the oil sector had to sell, went bankrupt …
— Edward Mermelstein, founding partner, Rheem Bell & Mermelstein LLP

He says his firm deals with legitimate business people who have been losing money because of the Ukraine crisis, as well as low oil prices, and economic sanctions against Russia. They want to take their money out and invest it in the United States.

Christopher Weafer of Macro-Advisory estimates the Russian economy will decline 3.5 percent in 2015, a bleak picture for business activity. In 2014, $151.5 billion left the country, according to the bank of Russia. This year, the Russian finance minister expects another $100 billion in outflows.

“Many of our clients who were making substantial money in the oil sector had to sell, went bankrupt, and are putting money back into the businesses in order not to lose their businesses. They have to diversify into other means of getting income, and real estate has become a very popular alternative to their investments in their own country,” says Edward Mermelstein, founding partner of Rheem Bell & Mermelstein LLP.

In addition, many businessmen have borrowed in dollars and euros but are earnings their income in rubles. Paired with the ruble’s decline, this is a deadly combination and necessitates better investments.

If you were highly leveraged, when everything happens you are in a much worse position.
— Marlen Kruzhkov, attorney, Gusrae Kaplan

“If you were highly leveraged, when everything happens you are in a much worse position. They have been cut off from Western capital markets—not only are their debts expensive, you cannot refinance your dollar debt. It’s a real problem,” says Kruzhkov.

Mermelstein says Eastern businessmen are used to taking risks and Kruzhkov says some of the returns on investment over there have been “comical,” but these people face different risk/return profiles in the United States.

Safe in US Real Estate

For wealth preservation, existing trophy real estate is the prime target. “If you buy a $40 million building in Manhattan, the chances of losing that money are pretty much zero,” says Kruzhkov. In 2014, New York attracted $55.4 billion in real estate investment from all over the world.

The United States provides a stable framework for investing and backs it up with the rule of law, something that cannot be said about the former communist republics. “The likelihood of their investment disappearing like it may be in their former residence is very low in the United States,” says Mermelstein.

For those who are not happy with just 3 to 4 percent returns for existing real estate in Manhattan, Mermelstein says they can make much more money with higher risk development projects.

If they invest equity right at the inception of a new development (when the land is first acquired), they can make as much as 400 percent over a period of three to four years.

In addition, luxury real estate for self-use is still popular, although investing rather than using has been become the dominant theme.

“In 2009/2010, that was not necessarily investment rather than vanity. You had very wealthy people trying to outdo each other in terms of how big and how important an asset they were buying,” says Mermelstein. “Today that focus has shifted.”

Despite the fact that both law firms have a strict policy of not taking on questionable clients, some do try.

“I get guys who show up, wanting to buy a $5 million apartment in cash, but they made $500,000 over the last three years. When I ask them how they made the money they soon run out of good answers,” says Kruzhkov.

Mermelstein says many politicians or people affiliated with politicians lack the credibility to become legitimate investors.

“Politicians in most of these countries make very, very modest salaries. If they are trying to make an investment that is substantial and they can’t prove their source of funds, those two issues raise red flags,” he says.

Chris Weafer doesn’t think growth in Russia can return to 3 to 3.5 percent until 2020. Until then, capital will further flow from East to West.