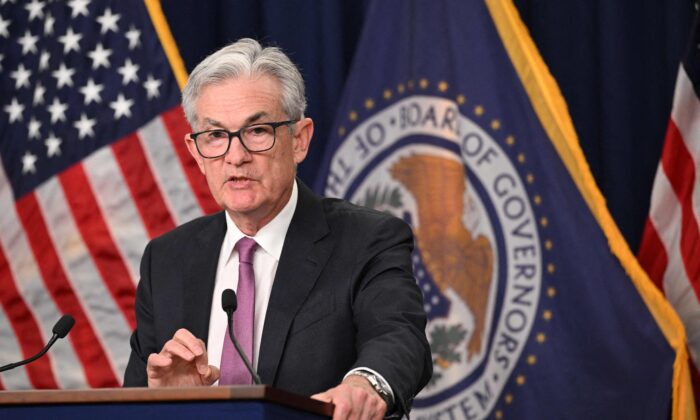 Federal Reserve Chair Jerome Powell thinks it would be prudent to take the preliminary reading of the second-quarter gross domestic product numbers with a “grain of salt.”

In a post-Federal Open Market Committee (FOMC) press conference Wednesday, Powell told reporters that there should not be too much concentration on the initial GDP print since the figures are “revised pretty significantly.”

“It’s very hard to cumulate U.S. GDP, it’s a large economy and a lot of work and judgment goes into that,” Powell said. “You tend to take first GDP reports, I think, with a grain of salt, but of course, it’s something we’ll be looking at.”

Despite widespread fears that the central bank’s tightening efforts would result in an economic downturn, Powell assured everyone that the institution was not trying to trigger a recession.

“We don’t think we have to. We think there’s a path for us to be able to bring inflation down while sustaining growth,” he said, adding that the economy is slowing and the path to a soft landing has “clearly narrowed” based on external factors.

“Recent indicators of spending and production have softened,” Powell stated. “Growth in consumer spending has slowed significantly, in part reflecting lower real disposable income and tighter financial conditions. Activity in the housing sector has weakened in part reflecting higher mortgage rates. After a strong increase in the first quarter business, fixed investment also looks to have declined in the second quarter.”

Ultimately, according to Powell, the Fed’s chief objective is to restore price stability.

What’s Next for Interest Rates?

Powell kept the door open for “another unusually large increase” at the September FOMC policy meeting.

The Fed chair remarked that the central bank would no longer provide forward guidance, a policy tool that market experts argue is misguided. Forward guidance aims to send signals to the financial markets and help steer the economy. By maintaining this strategy, investors are not blindsided by sudden changes to interest rates and other policies.

Jason Brady, the president and CEO at Thornburg Investment Management, thinks this decision is “a breath of fresh air.”

“In an era of uncertainty, we don’t need any central bank locking themselves into a bad policy move, especially when they are communicating that they are data dependent,” he said in a note. “Clearly the worst mistake the Fed has made in some time was in the context of refusing to adapt quickly enough to changing circumstances.”

Meanwhile, Powell acknowledged that the rate hikes could slow based on the data.

“As the stance of monetary policy tightens further, it likely will become appropriate to slow the pace of increases while we assess how our cumulative policy adjustments are affecting the economy and inflation,” he said.

In the meantime, Powell conceded that the Fed had reached a neutrality range, bringing the benchmark fed funds rate to around 2.5 percent. A neutral rate suggests it can neither spur growth nor restrict the economy.

U.S. Treasuries were green across the board, with the benchmark 10-year yield up 4.7 basis points to 2.779 percent. But the spread between the 2-year and 10-year yields, which many investors utilize as a vital recession indicator, remains about -20 basis points.

The U.S. Dollar Index (DXY), which gauges the greenback against a basket of currencies, took a breather as it tumbled below 107.00. Still, year-to-date, the index is up nearly 11 percent.

A key explanation for the jump in equities has been renewed confidence in the Federal Reserve, says Brady.

“The market now believes that the Fed is ‘on the job,’ and this gets the Fed to what they believe is a neutral rate,” he said. “Markets have already priced in cuts later in 2023, and that indicates an expectation of some level of ‘normalization’ either due to recession or a soft landing.”

According to Jan Szilagyi, CEO and co-founder of Toggle, an investment research platform, investors found comfort in the FOMC meeting and Powell’s comments.

“Reassurance that inflation will be dealt with and longer-term yield won’t explode higher on rising inflation expectations will be a source of comfort for stocks,” Szilagyi noted.

The Fed will hold its next two-day meeting on Sept. 21-22. According to the CME FedWatch Tool, the market is penciling in a 50-basis-point hike, with lower odds of a three-quarter-point increase.

ING Chief International Economist James Knightley thinks that the annual Jackson Hole retreat will offer clarity on where the central bank is headed.

“Comments for Chair Powell that the size of future rate hikes will depend on the data and that smaller rate hikes will be appropriate at some point make obvious sense,” he wrote. “Jackson Hole is when we will get a clearer indication from the Fed.”

The yearly economic policy symposium in Wyoming will take place from Aug. 25 to 27.