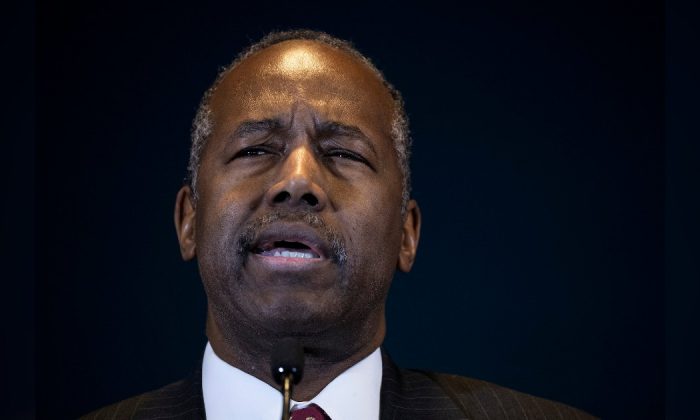 ‘Take Care of Your Own First’: Carson Defends Plan to Evict Illegals From Govt. Housing

Housing and Urban Development (HUD) Secretary Ben Carson pushed back against a bevy of criticism from Democratic lawmakers over a White House proposal that would exclude all illegal immigrants from public housing.

Carson testified in the House Financial Services Committee on Tuesday to discuss a range of topics. Numerous Democrats attacked the Republican for his involvement in a plan that, according to a recent HUD study, could potentially kick as many as 55,000 legal children out of their homes.

The California Democrat went on to call the plan a “cruel proposal.”

“The ‘D’ in HUD does not stand for ‘deportation,’” said Democratic New York Rep. Carolyn Maloney.

“We cannot create affordable housing for Americans by throwing other Americans out in the street with no place to go.”

Other Democrats made similar comments throughout the hearing.

The criticism follows moves by the Trump administration to restrict who can qualify for housing assistance.

While illegal immigrants are already barred from receiving federal housing subsidies, families of mixed-immigration status can score these benefits as long as one of the members was born in the U.S. or is the spouse of a citizen—providing a “loophole” for many illegals.

The White House’s proposal calls for every member of a household to be of “eligible immigration status” in order to qualify.

Democrats, however, stand fiercely opposed to the plan because it would mean leaving thousands of legal minors—many of them born in the U.S. by illegal parents—homeless.

Carson pushed back on May 21, pointing out that millions of legal citizens are placed on waiting lists for years for government-subsidized housing.

“It seems only logical that tax-paying American citizens should be taken care of first,” the HUD secretary said.

“It’s not that we’re cruel, mean-hearted. It’s that we are logical. This is common sense. You take care of your own first.”

Carson went on to explain that the plan allows ineligible beneficiaries up to 18 months to remain in their homes.

“Congress has a responsibility for making the laws that govern this, and they have the ability to change that,” he went on.

“If in fact you want to explain to the American citizens who have been on the wait list for several years … why we should continue to support families who are not here legally, I would be happy to join you in explaining that.”