‘Take Back Your Pass’: Mass Protests Erupt Against COVID-19 Vaccine Passports in France 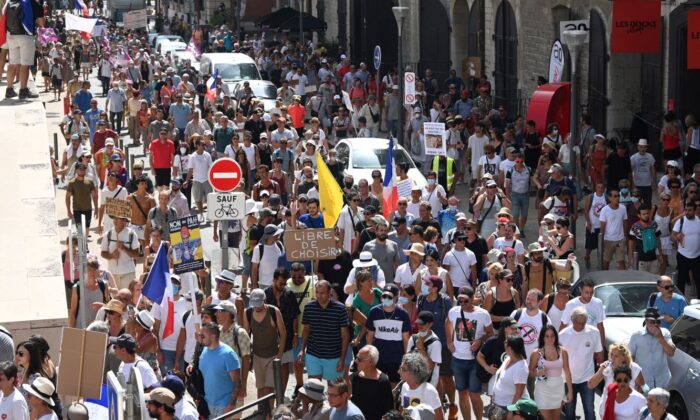 Demonstrators march during a national day of protest against the compulsory COVID-19 vaccination for certain workers and vaccine passports. (Sylvian Thomas/AFP via Getty Images)
By Jack Phillips

Tens of thousands of protesters took to the streets across France over the weekend to demonstrate against the government’s COVID-19 vaccine passport mandate that prevents unvaccinated individuals from entering restaurants and bars, as well as taking long-distance trips.

France’s Interior Ministry told Reuters that 215,000 people are estimated to have protested, which is down slightly from the 237,000 people who demonstrated the previous week.

Protesters often chanted “freedom,” “pass equals apartheid,” and “take back your pass,” referring to the vaccine passport. Some French citizens told media outlets that they joined the demonstrations because the COVID-19 passports limit their freedoms and are a way to segregate society for political purposes, rather than health reasons.

Crowds were seen marching in Paris, Nice, Marseille, and other French cities.

The French Parliament approved the COVID-19 health pass law in late July, requiring citizens to show the pass in public areas, proving they’ve been vaccinated or recently tested negative for the virus. The country’s top court upheld the law earlier this month, as well as a law mandating COVID-19 vaccinations for all health workers.

And while some media outlets claimed the protests were part of the “anti-vax” movement, many French demonstrators have said they support the vaccines but not the restrictions.

“I am for the vaccine and had it months ago, but not the health pass, which is discriminatory,” one protester said on Aug. 14, the Guardian reported.

Roughly 1,600 police officers were deployed for three separate marches in Paris. Authorities didn’t provide information on whether there were any arrests.

Over the past weekend, there were also demonstrations in Quebec, Canada, which recently mandated COVID-19 vaccine passports for restaurants, bars, and gyms.

“It should be the choice of each person whether to be vaccinated. With the passports, it is a means of forcing us” to get vaccinated, said Veronique Whalen, of Montreal, in a comment to France24.

This week, New York is slated to debut its vaccine passport system at restaurants, gyms, theaters, and bars, even as certain demographics in the city have very low vaccination rates. About 67 percent of black New Yorkers between the ages of 18 and 44 have received no doses of any COVID-19 vaccines to date, according to data provided by the city.