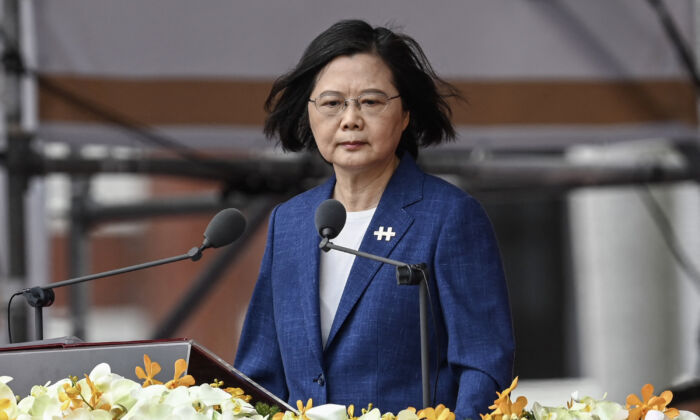 Taiwan will protect its people from falling into the hands of communist authoritarianism, its president said at the 110th National Day ceremony in Taipei on Oct. 10.

“We will continue to bolster our national defense and demonstrate our determination to defend ourselves in order to ensure that nobody can force Taiwan to take the path China has laid out for us,” President Tsai Ing-wen said during the ceremony, which was held in the plaza in front of the Presidential Office.

“The path that China has laid out offers neither a free and democratic way of life for Taiwan, nor sovereignty for our 23 million people,” she said.

National Day marks the establishment in 1912 of the Republic of China (ROC), Taiwan’s official name. Yet the Chinese regime considers the island a wayward province, despite that the de facto independent country has its own constitution, military, and ruling party.

Although Beijing has warned for decades that any attempt by Taiwan to seek “independence” means war, the Chinese Communist Party (CCP) has never actually governed the self-ruled island.

Before the communist regime came into power 72 years ago and established the People’s Republic of China, the legitimate government retreated to Taiwan.

On the eve of the 110th anniversary of the founding of the ROC, Chinese leader Xi Jinping claimed to have achieved “peaceful reunification” with Taiwan. It came after Beijing ramped up military threats by flying 150 fighter jets and bombers into Taiwan’s air defense zone earlier this month.

“Regional order is being challenged in the South and East China seas. The routine Chinese military activity in Taiwan’s southwestern air defense identification zone has seriously affected both our national security and aviation safety,” Tsai said.

The Taiwanese president pledged to safeguard the island against dramatically rising aggression.

“We hope for an easing of cross-Strait relations and will not act rashly, but there should be absolutely no illusions that the Taiwanese people will bow to pressure,” Tsai said. “And we will do our utmost to prevent the status quo from being unilaterally altered.”

China had proposed that Taiwan be brought under Chinese rule under the “one country, two systems” formula, which the regime promised Hong Kong in 1997. Yet Taipei rejected the offer after Beijing rolled out relentless efforts to undermine Hong Kong’s autonomy.

“We do not have the privilege of letting down our guard,” Tsai said, saying that Taiwan is standing on the frontline of democracy in defending against the expansion of communist authoritarianism.

Some U.S. senators and members of the House of Representatives congratulated Taiwan days before the celebration, reaffirming the island’s regional and global contributions and the importance of the U.S.–Taiwan bilateral partnership.

​​“We are mindful that Taiwan stands at the forefront of confronting challenges posed by the Chinese government,” said Sens. Bob Menendez (D-N.J.) and Jim Inhofe (R-Okla.) in a joint letter (pdf) to Tsai dated Oct. 5. Menendez is the chairman of the Senate Foreign Relations Committee.

“You can count on our continued support in ensuring Taiwan remains one of our most important partners in the Indo–Pacific region.”