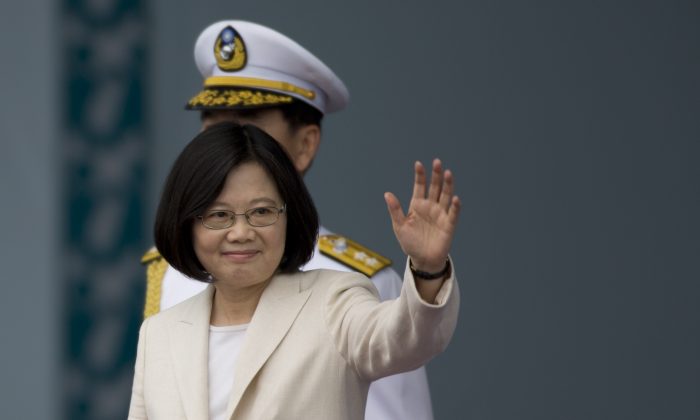 Taiwan President Tsai Ing-wen waves to the supporters at the celebration of herinauguration on May 20, 2016 in Taipei, Taiwan. (Ashley Pon/Getty Images)
By Paul Huang

Amidst Beijing’s increasingly aggressive actions, Taiwan’s President Tsai Ing-wen called on like-minded countries around the world to start pushing back against China and other “anti-democratic forces” across economic, political, and military fronts.

“Historical trends do not always favor the forward march of democracy. But in Taiwan, moving backward is not an option,” Tsai said on June 25.

“In the 21st century, democracy is in retreat,” she said, citing a report by Freedom House that found global freedom has been in decline for 12 consecutive years.

“Anti-democratic forces” are threatening Taiwan, Australia, United States, and others around the world today, she said. Tsai was not afraid to point the finger at China, which claims Taiwan as one of its provinces.

“Over the past two years, we have faced increasing pressure from China as they threaten our democratic way of life and limit our international space,” she said.

“These anti-democratic forces will proliferate if like-minded countries do not stand and act together.”

Tsai was speaking at a forum celebrating the 15th anniversary of the Taiwan Foundation for Democracy (TFD), a Taiwanese government-supported organization that engages in worldwide democracy promotion and related activities.

Tsai said that like-minded countries must work together to fight against unwanted economic, political, or military coercion from the world’s emerging “sharp powers,” a reference to a 2017 report published by U.S. National Endowment for Democracy (NED), which is supported by U.S. Congress and has a mandate similar to Taiwan’s TFD.

In another interview with AFP on June 25, Tsai again urged international partners to help Taiwan defend against China’s aggressive encroachments.

“This is not just Taiwan’s challenge, it is a challenge for the region and the world as a whole, because today it’s Taiwan, but tomorrow it may be any other country that will have to face the expansion of China’s influence,” Tsai told AFP.

China has been rapidly building up its military and exhibiting an ever-more aggressive military posture against Taiwan, such as increased activity by military aircraft circling Taiwan in recent months and the activation of a controversial air route in January that runs directly through the middle line of the Taiwan Strait.