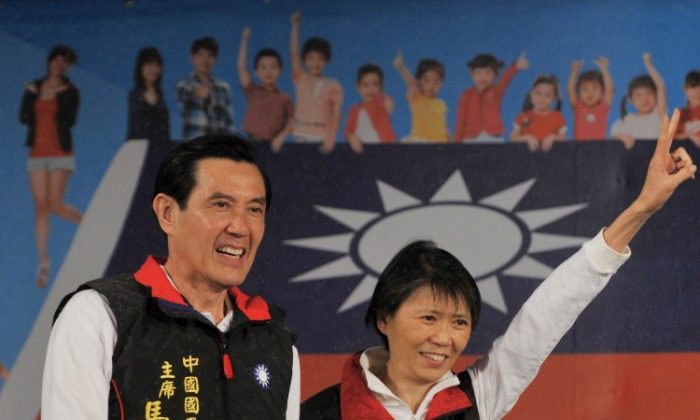 Taiwan President of the ruling Kuomintang Party Ma Ying-jeou and his wife Chou Mei-ching smile as they step on stage after voting results showed that he won the election at his campaign headquarters in Taipei on Jan. 14, 2012. (Aaron Tam/AFP/Getty Images)
China

By Gary Pansey and Luo Ya
Print

While Taiwan’s recent election may have given mainlanders an inspiring taste of democracy, dissidents in and out of China fear that the election’s outcome is a setback for hopes for achieving democracy on the mainland.

On Jan. 14, Republic of China (Taiwan) President Ma Ying-jeou of the Kuomintang or Nationalist Party (KMT) won re-election with 51.6 percent of the vote, beating Tsai Ing-wen of the Democratic Progressive Party (DPP).

“Cross-strait relations in the coming four years will be more harmonious with more mutual trust and less chance for conflict,” Ma said in his victory speech. “I must provide Taiwan with a sustainable and stable environment.”

Critics reacted to Ma’s speech by pointing out that bringing democracy to mainland China is the key to harmonious cross-strait relations.

“We would like to see cross-strait peace, but we all know that the CCP tyranny never keeps its word, so the key to reaching peace across the straits is to promote the democratization of mainland China,” said Hu Ping, editor-in-chief of the dissident magazine Beijing Spring, in an interview with New Tang Dynasty TV (NTD).

The dissident Beijing journalist Chen Ziming noted that if one side of the strait is democratic and the other side authoritarian, then mainland China will always be a threat to Taiwan.

“We have always hoped that Taiwan will become a base for democracy in China,” said the Beijing constitutional scholar Chen Yong-Miao to the Epoch Times. “Four years ago when Ma Ying-jeou took office, we rejoiced, and believed this goal was in sight. Many people even thought of immigrating to Taiwan.

Huang Qi, the founder of the China Tianwang Human Rights Service, is also concerned with the record of the KMT under Ma.

Huang told The Epoch Times that the KMT has sought to please the CCP, rather than uphold truth and justice, and it seems to have forgotten the numerous persecutions and the suffering people are enduring in China, including such vulnerable groups as political prisoners, human rights activists, and Falun Gong practitioners.

“Today, history chooses Ma Ying-jeou,” Huang said. “We sincerely hope that President Ma Ying-jeou and his team can regard the democratization of China as their responsibility, and intensify their concern for the human rights situation in China.”

Wang Dan, a mainland democracy activist and a visiting professor at the National Cheng Kung University in Taiwan, told The Epoch Times on Jan. 15 that this presidential election has had a great impact on mainland China, leading many mainland Chinese to visit Taiwan in order to see the election personally, as well as keep track of the contest via the Internet.

Professor Xia Ming, a political scientist at the City College of New York, said that Taiwan’s election has torn apart the false concept implanted by the communist regime that democracy does not fit China’s situation.

Conversely, the election has had a major influence, Xia said, especially in China’s intellectual community, causing them to question and challenge the Communist Party’s rule.

The son of the former secretary to Zhao Ziyang (a reformist premier and head of the CCP in the 1980s), Bao Po, made a similar point on Jan. 15 in Taipei, saying that Taiwan’s democracy is a role model and proves that the Chinese community is suitable for democracy, while also pressuring the CCP to democratize.

Xu Tianming, a lawyer from Shenzhen, wrote to the authorities on his blog, “After Tsai Ing-wen lost the election she resigned from her position as chair of the Democratic Progressive Party. She also hoped that Ma Ying-jeou, in his next term, will listen to the public, use his conscience to govern the country, and treat each citizen fairly. This is what Tsai Ing-wen has recommended to Ma Ying-jeou; this is what we will all ask of the CCP leaders.”

Continued: A Bet on China’s Democracy