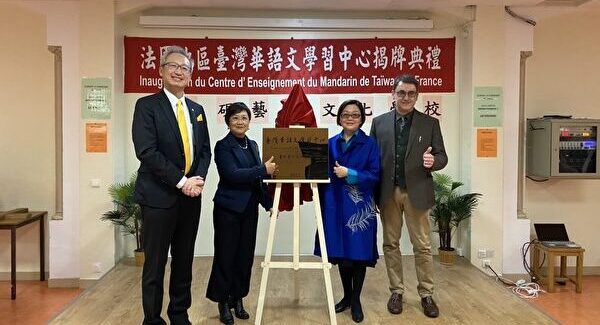 China’s ruling communist party went to great lengths to establish its network of Confucius Institutes across college campuses around the world. But many countries have since withdrawn their partnerships having discovered that these institutes are a propagandized extension of the Chinese Communist Party (CCP)—used simply as a means to promote the party’s communist philosophy. As a result, Taiwan is stepping into fill the new void to deliver traditional Chinese language education, with plans to establish 100 of its own institutes within the next five years.

Starting in June 2021, Taiwan began promoting its “Five-Year Plan to Add 100 Chinese Language Centers.” An update to this plan was broadcast on Radio Taiwan International (RTI) by Tong Chun-yuan, chairman of Taiwan’s Overseas Chinese Affairs Council. He said that 45 centers have already opened, including 35 in the United States, two in each of England, France, and Germany, and one in each of Sweden, Hungary, Austria, and Ireland.

Looking ahead Tong said, “We have already planned to add 20 new schools next year and the year after, and 15 more in the last year, adding up to 100 schools.”

In explaining the difference between Taiwan’s Chinese Language Centers and the CCP’s Confucius Institutes, Tong said that Taiwan’s schools do not promote communism, which is not a part of China’s original culture. Taiwan is aligned with the universal values of the United States. It is a democratic, free, and open society which has allowed the country to maintain the authentic cultural heritage of China. For this reason, Tong said, Taiwan’s Chinese Language Centers have received favorable feedback in every country where they have been established.

Taiwan’s Overseas Community Affairs Council signed a joint agreement with the United States in December of 2020. Dubbed the “U.S.-Taiwan Education Initiative,” the agreement established a collaborative model for Taiwan’s language centers through the American Institute in Taiwan (AIT). The model strengthens the cooperative relationship between the two countries for language education.

In August of 2020, Mike Pompeo, the former U.S. Secretary of State said that “the Department of State designated the Confucius Institute U.S. (CIUS) Center as a foreign mission of the PRC.”

Speaking bluntly, Pompeo said the CIUS is “an entity advancing Beijing’s global propaganda and malign influence campaign on U.S. campuses and K-12 classrooms. Confucius Institutes are funded by the PRC and part of the Chinese Communist Party’s global influence and propaganda apparatus.” He said that the U.S. government wants American students to learn proper Chinese culture and language without being manipulated by the politics of the CCP, as it is doing in Hong Kong now.

During an October 2020 radio interview on Florida’s “Good Morning Orlando” program, Pompeo said that the Trump administration was addressing the matter by asking schools across the country to close their Confucius Institutes by the end of the year.

In a documentary film titled, “In the Name of Confucius,” Director Qiu Min exposed the relationship between the CCP and Confucius Institutes globally. The institutes are controlled by the CCP’s “Hanban,” which is an agency of the CCP’s foreign-looking United Front Work Department. Mention of this relationship is posted on the CCP’s official website.

In February 2020, Qiu Min was invited to visit the University of British Columbia and deliver a screening of her documentary. During a post-screening panel, she said the rapid foreign expansion of Confucius Institutes was facilitated by substantial funding provided by the CCP’s Hanban, making the institutes essentially free to run for the U.S. institutions.

Despite the allure of Hanban’s funding, the University of British Columbia rejected the CCP’s offer four times, choosing to work instead with Taiwan’s Chinese Language Centers. Concerning to the university was how the CCP repeatedly cautioned them, “not disclose the contents of the contract” and not to mention “sensitive” topics such as Falun Gong, the Tiananmen Square “incident,” or Taiwan.

A 2019 survey by the U.S. Government Accountability Office discovered that the CCP had given over $150 million in funding to CIUS. During an interview with Voice of America, Sen. Rob Portman (R-Ojio) confirmed there were nearly 100 Confucius Institutes on U.S. college campuses and that 70 percent of them had not properly reported any details about their CCP funding.

Confucius Institutes Closed in Many Countries

After Secretary Pompeo declared the CIUS a “foreign mission” of the CCP, an increasing number of countries became wary and launched investigations. This became the impetus for the start of closing of many Confucius Institutes worldwide.

The Hindustan Times reported in August 2020 that the Indian government had begun scrutinizing Confucius Institutes after Pompeo’s declarations. This was a serious matter for India since the Chinese Institute of Calcutta and the University of Mumbai were both involved in an elaborate student exchange program with China.

In addition, the Indian Ministry of Education decided to review seven universities partnering with Confucius Institutes and classrooms. Most of the schools under review are well-known Indian institutions that had signed a total of 54 memoranda of understanding with Chinese universities, but these memoranda were still pending approval from the Indian central government.