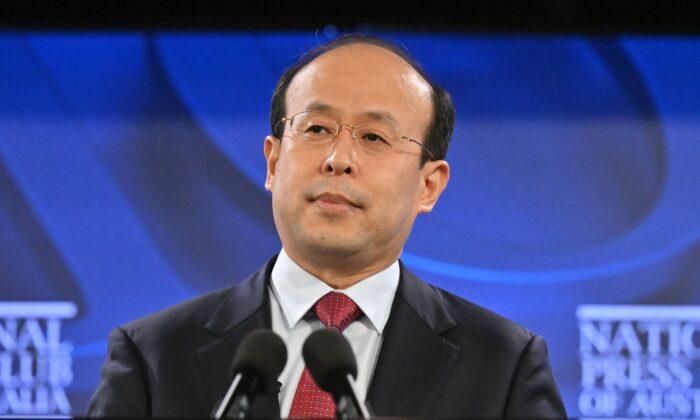 Taiwan Would Undergo ‘Re-Education’ If Beijing Were to Take Over: Chinese Ambassador

The Chinese Ambassador to Australia, Xiao Qian, has told a room full of journalists that Beijing will use any force necessary to bring Taiwan under its control and that once under the Chinese Communist Party’s (CCP) rule would undergo some form of re-education.

The comments came during an address to the National Press Club on Aug. 10, when Australian journalists pressed the Chinese regime’s representative about the current tensions in the Taiwan Strait.

When asked about the potential for China to invade Taiwan, Xiao told reporters that although the use of force was the last thing that Beijing wanted, it could “never rule out the option to use other means.”

The CCP ambassador also said it was his personal understanding that if an invasion was successful, its citizens would undergo “re-education.”

He said that Taiwan had been run by “a regional regime for many decades” and that “their perspective” about Mainland China might have different views, requiring “a process for the people in Taiwan to have a correct understanding of China.”

The comments from the ambassador mirror those made on Aug. 7 by the Chinese ambassador to France, Lu Shaye, who told French media outlet LCI that if Beijing were to take over Taiwan, its 23 million residents would undergo re-education—echoing the situation faced by Uyghurs in Xinjiang.

Xiao also declared that Taiwan was not an independent state, saying the matter was a domestic issue and referenced the 1943 Cairo Declaration.

The Cairo Declaration was an agreement made between U.S. President Franklin D. Roosevelt, Chinese President Chiang Kai-shek, and British Prime Minister Winston Churchill in Cairo, Egypt, during the Pacific campaign in World War II. It recognised China as an ally and agreed that territories taken from China by Japan, including Manchuria, Taiwan, and the Pescadores, would be returned to the control of the Republic of China after the conflict ended.

Beijing also declared six exclusion zones encircling the island for the war games. Warplanes and vessels have crossed the median line of the Strait.

“We seek no escalation, nor do antagonise others,” Taiwan’s defence ministry said on Twitter, adding that its armed forces were committed to defending the self-governing island.

According to Reuters, the military drills are the biggest ever held by the CCP’s military wing, the People’s Liberation Army (PLA) with 11 ballistic missiles launched so far.

Five of the missiles were said to have landed in Japan’s Exclusive Economic Zone, which extends 200 nautical miles from the country’s coast.

The PLA also deployed 22 Chinese fighter jets, which crossed the median line of the Taiwan Strait. Unmanned aerial drones were also launched and flew over the Kinmen Islands—1.3 miles from the Chinese coastline—forcing Taiwanese troops to fire warning flares to drive away at least four aircraft.

Three drones flew over waters near Taiwan’s east coast, according to an announcement (pdf) from Japan’s defence ministry.