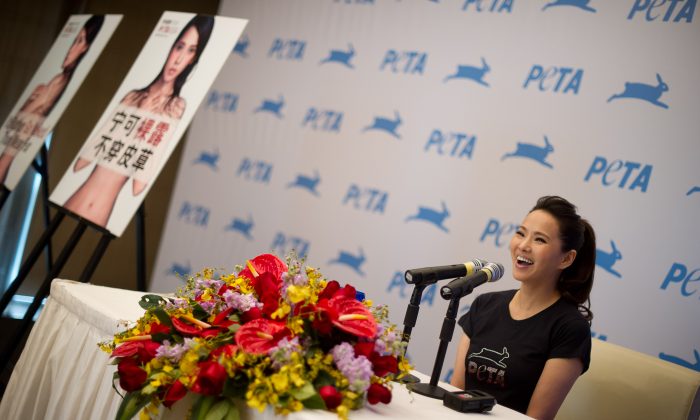 Actor and singer Annie Yi speaks to the media as she unveils an anti-fur campaign for People for the Ethical Treatment of Animals (PETA) at a hotel in Beijing on March 8, 2012. Now Yi is making news again, this time by giving a large money donation to a disabled Chinese petitioner. (Ed Jones/AFP/Getty Images)
China

A charitable gift by well-known Taiwanese singer and actress Annie Yi has sparked expressions of gratitude and admiration in mainland China.

Annie Yi made headlines in January when she was briefly taken away by security forces for a “chat” after she criticized China’s media control during a newspaper censorship incident. Her outspokenness earned her tens of thousands of supportive messages from Chinese users of Sina Weibo, a popular microblogging platform.

Now Yi is making news again, this time by giving a large money donation to a disabled Chinese petitioner.

Yi responded to a call for help from Wang Zang, a famous Chinese poet who has long been a champion for the poor and other vulnerable groups.

Wang Zang had posted a message on his Weibo on April 16, asking people to assist Wang Xiaogang, a disabled man from Pucheng City, Shanxi Province and his elderly father who has been petitioning authorities for years on behalf of his son, and who is now disabled himself.

Wang Xiaogang had been an employee at the No. 3 Thermal Power Construction Corporation, a subsidiary of Shaanxi Power Construction Corporation. On Feb. 7, 2007, while at work he was bitten by the dogs of a colleague, who had intentionally released them. This led to a severe mental illness, and Wang has not been able to take care of himself since then. The company failed to provide worker’s compensation or medical treatment, and his father, 73-year-old Wang Yingqiang, has since tried unsuccessfully to obtain assistance for his son through petitioning authorities.

The father is now also disabled because of severe beatings he received when he traveled to Beijing to petition, Wang Zang wrote on his Weibo.

“On crutches, he finds me at last. Artist Zhui Hun and I took him in. He is alone, desperate and in tears, begging anyone who sees this post to forward it. On behalf of the old man, I sincerely thank you!” Wang Zang wrote.

As soon the message was posted, Wang Zang received a reply from Annie Yi, saying she would donate 10,000 yuan to the old man.

“The strong will always be tested by challenges,” she added.

A netizen using the pseudonym “Righteous Way of China” forwarded Annie Yi’s message to his more than 12,000 followers, saying: “Human rights activists hope that more influential celebrities from the entertainment industry would speak up for the needy.”

Wang Zang told The Epoch Times that he was greatly touched by Yi’s deed, and he respects her for it. He said he would personally hand the money to the old man.

In the interview, Wang Zang said that he hoped that more celebrities would use their influence to speak out for disadvantaged people in China. “It would bring changes to society, promote the progress of civil society, and bring warmth and hope to more and more people,” he said.

Translation by Frank Fang. Written in English by Gisela Sommer.