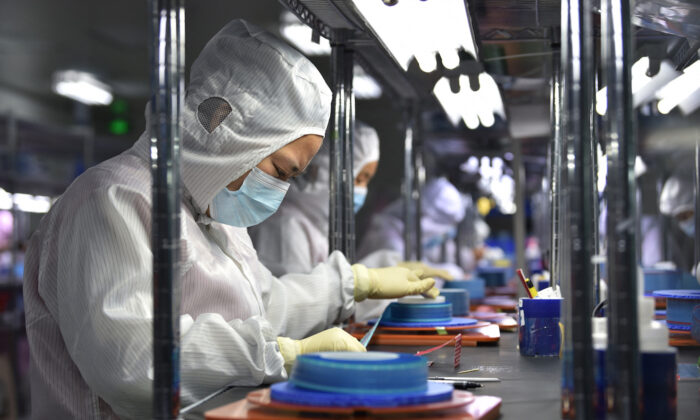 Taiwanese Investment Leaving China, Dropped by Half in a Decade: Expert

Over the past decade, Taiwan’s investment in China has significantly dropped, and due to a worsening business environment, those Taiwanese who remain in the country, do so at the risk of losing all of their investments, an online forum was told.

Lin Thung-Hong, a researcher at the Institute of Sociology, Academia Sinica, Taiwan, told the forum, organized by the civic group “Economic Democracy Union”, that it is necessary for Taiwanese businessmen to recognize the risks of doing business in China.

“Their money has been tied down in China, and they may also face the risk of a total loss,” he said.

Lin said that Taiwan’s investment in mainland China can be divided into three phases.

The second period is the “huge wave of investment” between the 2008 financial crisis and the 2014 Sunflower Movement.

The third phase began in 2015 when Taiwan’s capital in China began diminishing.

Lin said a watershed moment occurred after the Chinese Communist Party leader Xi Jinping came to power in late 2012. Since then the percentage of Taiwan’s investment in China dropped from 61.2 percent to 33.33, which is almost by half—equivalent to levels from 2000.

Some of the funds went to Southeast Asian and South Asian countries. A large amount of money was invested in the United States.

Lin described some of the changes that Taiwanese businessmen in China have experienced, with some examples being that they were once able to get tax cuts, land fee reductions, and cheap labor.

However, since 2007, Lin said that China has entered a period of industrial upgrading, and many Taiwanese businessmen were driven into inland areas such as the central and western regions.

The tax incentives for Taiwanese businessmen have also been canceled, he added.

Lin said in 2007, there were still 356 Taiwanese businessmen on the list of “One Thousand Largest Enterprises across the Strait”. In 2020, there were only 108. He said many were forced out of the Chinese market by what he described as a Chinese regime-backed supply chain.

“The situation of Taiwanese businessmen in China is a warning to all Taiwanese in mainland China,” Lin said.

However, he also emphasized that although Taiwanese businessmen are retreating, it does not mean that all of them will withdraw.

“It is normal that 10 percent and 20 percent will remain,” he said.

Wu Minzhou contributed to the report.