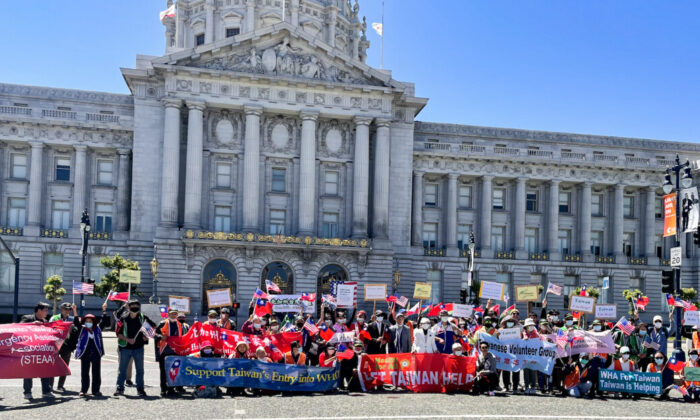 A crowd of more than 100 Taiwanese Americans gathered on May 14 in San Francisco to raise the public’s awareness of Beijing’s malicious intentions to block Taiwan’s access to the upcoming World Health Assembly (WHA) meeting.

The WHA is the governing body of the U.N.’s World Health Organization (WHO) and is scheduled to meet for its 75th annual meeting at the United Nations Office in Geneva from May 22 to 28. It will also be the WHA’s first in-person meeting since the start of the COVID-19 pandemic.

Taiwan has sent an application to the WHA for attending the meeting as an observer. However, the WHA has not yet responded to Taiwan’s request due to political pressure from Beijing, which sees the self-ruled island as a threat to its legitimacy.

“Taiwan stands firm in its commitment to engage in international health care cooperation and once again calls on WHO to maintain a professional and neutral stance, repudiate inappropriate political interference, and invite Taiwan to the WHA as an observer,” said Ms. Li Hanwen, the main organizer of the event. Li is a councilwoman for Taiwan’s Overseas Community Affairs Council in northern California.

The WHA has since 2018 continued to exclude Taiwan from its operations, siding with Beijing’s “One China” policy claim that Taiwan is a part of China, giving the communist regime the right to represent Taiwanese society at the international health body. As a result, Taiwan has had no access to any of the health-related information and benefits that are supposed to be shared by all societies, as outlined in WHO’s charter statement.

“Only the popularly elected government of Taiwan can represent its 23.5 million people at WHO and protect their right to health. WHO must seek appropriate methods for Taiwan’s institutionalized and regular participation in all WHO meetings, mechanisms, and activities,” Li asserted in her speech.

Taiwan had been allowed to attend WHA meetings from 2009 to 2017, but its access to the Assembly was blocked by the WHA under the political pressure from Beijing since 2018.

“Health is a basic human right, and should never be used as a bargaining chip in any world organizations,” Mr. Chen Junming, councilman of Taiwan’s Overseas Community Affairs Council in northern California, said at the event.

Chen, in his speech, praised the U.S. State Department’s recent action to call on the WHO to restore Taiwan’s observer status at the WHA. He also urged other Western countries to step forward with similar efforts. “We believe the unity of the free world will overcome China’s intervention, and successfully help Taiwan to become a member of WHA,” he said.

U.S. Deputy Secretary of State Brian P. McKeon reportedly met with WHO Secretary-General Tedros Adhanom Ghebreyesus on April 8, and urged the WHO to grant Taiwan observer status at the upcoming WHA annual event.

“Virus does not recognize gender, age, color and nation. The only way we can fight back is by working together, because together we are stronger,” said Scott Lai, who is the current Director-General of the Taipei Economic and Cultural Office (TECO) in San Francisco. TECO is Taiwan’s de facto consulate in the United States.

COVID-19 has caused more than 6 million deaths worldwide. “Taiwan can help, and Taiwan is willing to help,” Lai said. He mentioned that during the pandemic, Taiwan has donated more than 53 million surgical masks to different nations around the world.

This year, Taiwan’s elected government continued to advocate for its attendance to the WHA meeting as an observer. Taiwan’s Ministry of Foreign Affair (MOFA) has reportedly obtained much support for its cause from many nations and international institutions.

The World Medical Association (WMA) on April 19 called on the WHO to allow Taiwan to participate in the WHA meeting.