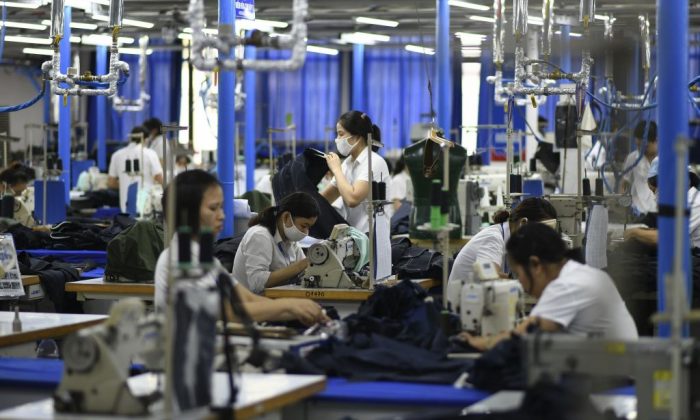 TAIPEI, Taiwan—Vietnam has become a preferred alternative for manufacturers shifting production out of China in order to dodge U.S. tariffs. For a group of Taiwanese firms that have operated in the Southeast Asian country long before the Sino-U.S. trade war, they are seeing risks instead of new business opportunities.

Shen Hsien-yu, president of the Council of Taiwanese Chambers of Commerce in Vietnam, explained that Taiwanese firms currently in the country have existing supply chains and partners to meet orders from existing customers.

As a result, Shen explained that they do not have the capacity to take on new orders from companies shifting away from China-based manufacturers, in a recent interview with Taiwanese media Central News Agency (CNA).

One such firm that couldn’t take on new orders was Vietnam Precision Industrial No.1, a subsidiary of Taiwan-based metal component supplier EuroCharm Group, according to CNA.

Most recently, 15 percent tariffs on $112 billion worth of Chinese imports went into effect on Sept. 1, covering goods such as clothes, chocolate, diapers, shoes. Another round of 15 percent tariffs will take effect on Dec. 15—by which time all Chinese-manufactured products will have punitive tariffs added.

On Sept. 3, U.S. President Donald Trump warned China not to drag on trade talks until after the U.S. presidential election, saying that the deal would be “much tougher” if he were to win re-election.

While many companies are now eyeing Vietnam as their new production sites due to the U.S. tariffs, some Taiwanese firms are seeking new alternatives, according to CNA.

Lo Shih-liang, deputy president of the Council of Taiwanese Chambers of Commerce in Vietnam, explained that Taiwanese firms have a different strategy compared to their South Korean or Japanese counterparts, the former being likely to buy a piece of land and build a factory from scratch, while the latter is more likely to rent a facility.

As a result, Taiwanese firms tend to stay at a location longer since it is harder for them to relocate, explained Lo. Consequently, they also diversify their production bases in order to avoid risks associated with international affairs.

Taiwanese businessman, Henry Hsieh, president of Vietnam-based Chin Li Plastic Industrial Co., explained that he moved some of his production to Indonesia in 2010. Hsieh added that he and other Taiwanese firms in Thailand are now thinking about nearby Burma.

Investment regulations in Burma are not as well-established as in Vietnam, but Hsieh said he would look into Burma as an alternative option.

In July, Japanese media Nikkei reported that approved foreign investment in Burma rose 79 percent for the first six months this year compared to the same period a year ago, reaching $2.35 billion, according to Burma’s Directorate of Investment and Company Administration.

The majority of the $2.35 billion investment originated from Singapore with $1.3 billion, while investment from mainland China and Hong Kong grew by 150 percent to $590 million.