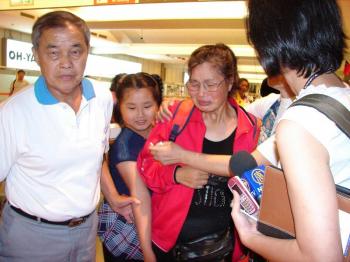 Shao Yuhua (C) bursts into tears as she reunites with her husband (L) after being detained for a week by Chinese authorities. (Daina Lee/The Epoch Times)
World

TAOYUAN COUNTY, Taiwan—Falun Gong practitioner Shao Yuhua and her daughter finally returned to Taiwan on Thursday August 6 after being detained by Chinese authorities for seven days while on a visit to China.

Ms. Shao burst into tears when she and her 9 year old daughter reunited with her husband at the Taiyuan International Airport on Thursday evening.

She thanked international organizations and fellow Falun Gong practitioners for helping to rescue her and her daughter from the hands of the Chinese regime. She also thanked the Taiwanese government for its support.

Ms. Shao and her daughter, naturalized citizens of Taiwan, were arrested by China’s State Security Bureau (SSB) in Nanyang City, Hebei Province on July 31. They were visiting Ms. Shao’s sister at the time.

The SSB ransacked her sister’s home and confiscated Ms. Shao’s money, passport and luggage. Ms. Shao’s sister was also arrested but was released a day later.

Although safe in Taiwan, Ms. Shao said she continues to be concerned about the fate of Falun Gong practitioners in China.

Theresa Chu, a Taiwanese lawyer, was at the airport to investigate how Ms. Shao was treated while in custody in China.

“She suffered sleep deprivation,” said Ms. Chu. “She was forced to write a repentance statement and threatened with brainwashing sessions. Her family’s safety was also threatened.”

Ms. Chu attributed the successful rescue effort to the support of the Taiwanese government and international community, as well as the efforts by Falun Gong practitioners around the globe.

The Canadian Friends of Taiwan and the U.S. Human Rights Law Foundation, the Global Falun Dafa Information Center sent messages to various human rights organizations, such as Amnesty International and Freedom House, calling for their help to rescue Ms. Zhao.

The Taiwanese government had offered to negotiate with the Chinese regime for the release of Ms. Shao, and was pleased the rescue was successfully accomplished in just a week.