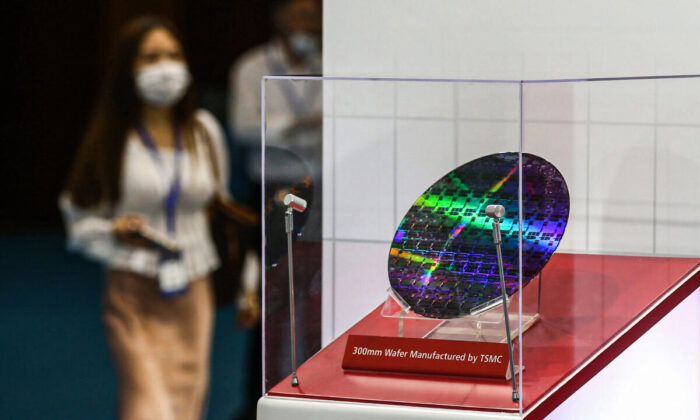 A chip by Taiwan Semiconductor Manufacturing Company (TSMC) is seen at the 2020 World Semiconductor Conference in Nanjing in China's eastern Jiangsu province, on Aug. 26, 2020. (STR/AFP via Getty Images)
Companies

A Taiwan-based supplier of silicon wafers has announced that it will be diverting $4.98 billion earmarked for the acquisition of a German hyperpure silicon wafer manufacturer towards investing in a new greenfield.

GlobalWafers said on Sunday that the all-cash tender offer for Siltronic AG, one of the world’s prominent manufacturers of hyperpure silicon wafers, failed to finalize all requisite conditions, including regulatory approvals, by the Jan. 31 deadline.

The capital expenditure set aside for the takeover, New Taiwan Dollar (NTD) 100 billion ($3.6 billion), will now be invested in brown- and greenfield capacity expansion plans and investments across Asia, Europe and the United States. The investments are predicted to be made over two years between 2022 and 2024.

“While the failed completion of our offer for Siltronic is disappointing, we have pursued a dual-track strategy from the very beginning of the tender offer,” said CEO Doris Hsu in an official press release. “I am very excited that we can consider now a broad range of options to advance technology development and enhance our capacities.”

GlobalWafers plans on expanding its product spectrum through focusing on next-generation offerings like wafers for advanced processes. The company is expecting to invest in mass production facilities that will enhance its first-mover advantage while increasing revenues across new business territories.

The proposed production lines are expected to scale up in the second half of 2023. These will then be expanded on a quarterly basis, said the company.

Earlier, the German government had said that it was not possible to complete all steps necessary to review GlobalWafers’ takeover of Siltronic. Though China’s market regulator agreed to the acquisition on Jan. 21 subject to certain conditions, the takeover bid lapsed as Beijing’s decision came in too late for Berlin to take into consideration. The original deadline for the proposal was set at Jan. 31.

Last year, GlobalWafers had secured a majority stake in Siltronic, planning to complete the transaction sometime later in 2021. If the deal had passed, it would have created the world’s second-largest manufacturer of 300-millimeter wafers. GlobalWafers had set aside around 4.35 billion euro ($4.98 billion) for the Siltronic investment.

The majority shareholder of Siltronic Wacker Chemie expressed dismay at Berlin’s decision. Wacker Chemie affirmed that it still intends to sell the 30.83 percent stake it holds in Siltronic.

Siltronic has now become “a competitor again,” the GlobalWafers CEO added. The company is currently evaluating multiple candidate locations for new production facilities and might commit to a final decision by the end of March.

GlobalWafers, headquartered in Hsinchu, Taiwan, has factories in other countries like South Korea, China, Japan, the United States, and Southeast Asia. The company’s decision to invest in the United States comes as other major semiconductor players like TSMC and Samsung have announced intentions to build chip plants in America.

Last month, Intel announced that it would invest $20 billion in Ohio to build two new “leading-edge” chip factories in a project in Licking County spanning around 1,000 acres.