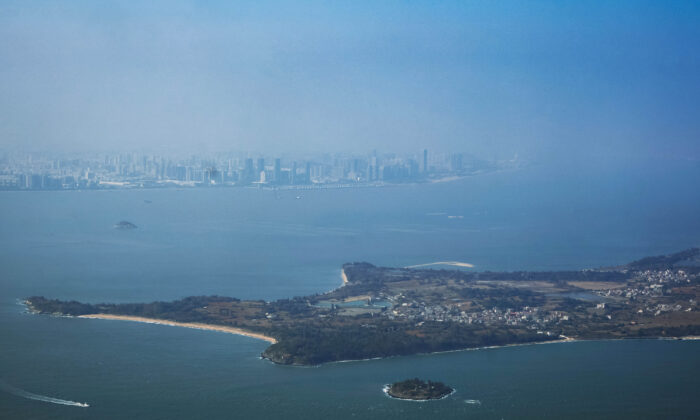 A view of the South China Sea between the city of Xiamen in China, in the far distance, and the islands of Kinmen in Taiwan, in the foreground, as seen from the airspace above Kinmen, Taiwan, on Feb. 2, 2021. (An Rong Xu/Getty Images)
Taiwan

On Dec. 5, 2021, when Taiwan’s Vice President Lai Ching-te went to visit Kinmen, he met a Taiwanese businessman surnamed Wang. Wang had been doing business in China for decades and came to make a petition.

Kinmen is a group of islands governed by the Republic of China (Taiwan) and the frontline facing Xiamen, controlled by communist China in the mainland. Lai went to Kinmen in December to explain the Taiwan government’s policies prior to Taiwan’s referendums on four political and social issues.

Wang told the Chinese edition of The Epoch Times he temporarily returned to Kinmen in 2019 to send his child to school and then was unable to return to China due to the COVID-19 pandemic. During this period, he communicated remotely to handle the work and business of his factory in Xinjiang, keeping in touch with Chinese employees and keeping the factory in operation. Everything was normal and he didn’t notice anything unusual.

But last November, employees told him that the Chinese regime sent personnel to the factory to demolish it without warning, tearing it down to the ground in a short time. Wang said that several equipment in the factory that was used for processing oil dehydration, each worth more than 500,000 yuan ($79,000), went missing. He estimated that the overall loss amounted to tens of millions of yuan (millions of dollars). He said that after the incident, he immediately contacted the Chinese authorities, but did not receive any response.

After he made a petition to Lai, the Chinese regime’s Taiwan Affairs Office addressed this incident on Dec. 15, claiming that his land in Xinjiang was not used for planting and breeding in accordance with the agreement, and in violation of regulations. The Chinese officials claimed that they had repeatedly communicated with the Taiwanese businessman Wang, but saw no results.

“What the Taiwan Affairs Office said is absolute nonsense,” Wang said, “I bought the land use rights with my own money.” He explained that in 2007, because the local government banned breeding, he submitted documents to the local government to change the use of land. The local Bureau of Land and Resources also went to the land for surveys. The change was approved by the relevant governmental departments. However, the local authorities went directly to the factory to demolish it without notice.

Wang said he’s seeking compensation of more than 40 million yuan ($6.3 million) from China, including compensation for compulsory land expropriation and loss of the factory plant and equipment. “I hope to get a reasonable explanation and justice.”

He thinks that he’s fortunate to have petitioned the Taiwan government and the relevant departments are actively contacting the mainland Chinese authorities.

“I used to be very pro-China, and now I finally know why people want to oppose the Chinese communist party (CCP),” Wang said. He explained that the change in his mind was due to this incident and he realized the CCP’s bullying nature. They don’t care about human rights and principles, persecuting the people however they want, “I am now starting to oppose the CCP.” He compared it with Taiwan, “here [in Taiwan] we value the law and democracy, and we protect private property very much. I feel that Taiwan is precious, and I must cherish it.”

Zhang Yuanzhang contributed to the report.