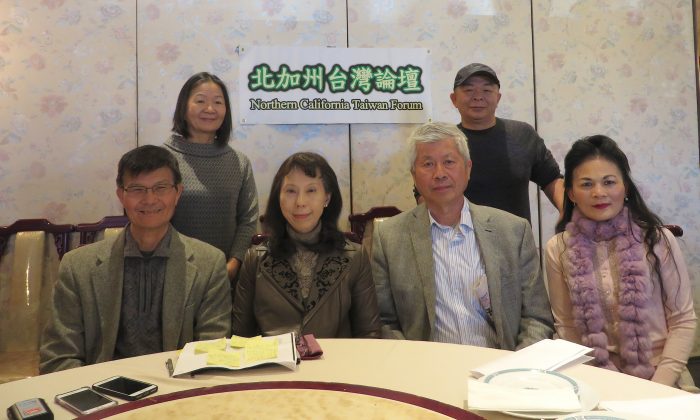 CUPERTINO, Calif.—The Northern California Taiwan Forum held a discussion session on the Taiwan Relation Act (TRA) Thursday, Feb. 21, as part of the celebration activities for the 40th anniversary of the legislation.

“The U.S. is a solid ally of Taiwan,” said Cathy Li, the coordinator of the forum, in Chinese.

Li said that it was the Act that established relations between the two countries for the last 40 years, adding, “It was in fact not easy.”

Carter’s decision to unilaterally nullify the treaty was then challenged by members of Congress, led by Senator Barry Goldwater (R-Ariz.).

As a result of the challenge, the TRA was passed by both the Senate and the House and signed into law by Carter on Apr. 10, 1979.

The Act established the base for the de facto diplomatic relations between the two countries.

The Act does not guarantee the United States will intervene militarily if Taiwan is invaded by China, but rather establishes a so-called “strategic ambiguity” to dissuade Taiwan from unilateral declaration of its independence and China from invading Taiwan.

The Act also requires the United States to arm the island nation with necessary “defensive character,” and to help the country maintain the capacity to resist any foreign forces that would jeopardize its security.

The Act resulted in four decades of peace between the two sides of Taiwan Strait.

Life begins at 40! #Taiwan & the #US are celebrating 4 decades of firm friendship & strong ties under the Taiwan Relations Act. The #TRA is the bedrock upon which this enduring partnership is founded. Read @taiwan_today’s article on #TRA40 festivities: https://t.co/qcAtQX7jmJ. pic.twitter.com/rEfJkZ6Tqj

In the last 40 years, China has claimed the TRA as an “intrusion by the U.S. into the internal affairs of China,” which has been a repetitive statement made by the Chinese regime whenever the United States criticized China’s humans rights record.

In a speech on Jan. 2, Chinese leader Xi Jinping claimed that “one nation with two political systems” is the basic strategy to unify Taiwan.

The “one nation with two political systems” model was invented for China to take back Hong Kong in 1997 from the British government.

The model has been viewed by a majority of Taiwan society as a failed model after Hong Kong’s Umbrella pro-democracy movement in 2014.

The controversial model has resulted in much debate. People supporting the strategy said that Taiwan has been a part of China since the Ming Dynasty, while people who were against it simply said there was no communist party in the Ming Dynasty.

Taiwan’s president Tsai Ing-wen, in contrast to China’s Xi, has been promoting “Taiwan consensus” ever since 2011, before she was elected.

“Taiwan consensus is freedom, democracy, and to refuse the model of one nation with two political systems proposed by China,” said Li.

In the years after the TRA signed into law in 1979, the United States has taken further steps to protect the island nation’s security.

Reagan’s administration made the Six Assurances to further clarify U.S.-Taiwan relations. The Six Assurance later became a Congressional resolution in 2016.

The United State’s Six Assurances are: no ending dates for arms sales to Taiwan; playing no mediation role between Taiwan and China; no change in position on sovereignty over Taiwan; no plans to change the TRA; and no consultation with Beijing on arms sales to Taiwan.

President Trump also signed into law the Taiwan Travel Act in February 2018. As a follow-up to the TRA, the new bill allows mutual high-level official visits from both the United States and Taiwan.

“Taiwan does not belong to the People’s Republic of China,” Li emphasized in her speech.

Li said Taiwan’s political system is better than China, because Taiwan has democracy, freedom and human rights. Li also pointed out that Taiwan’s model can be an example for China’s future.

Li pointed out that the country of 23 million people has long been without a one-party political system, and its people have confidence in their own future.

It was the TRA that protected Taiwan for the last 40 years, and helped the country become what is today. “We cherish US-Taiwan relations,” said Li.

Several other Taiwanese community leaders also spoke during the session to celebrate the 40th anniversary of the TRA and made announcements for a series of celebration activities in the coming months.