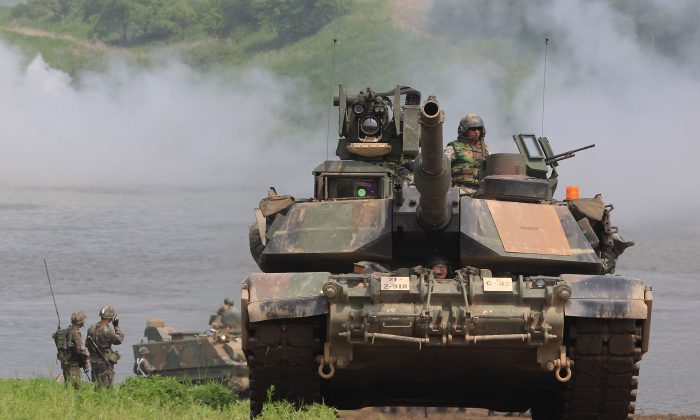 Taiwan’s military is reportedly on track to purchase U.S. M1A2 Abrams tanks to replace its aging fleet of main battle tanks. The tanks are expected to serve as the frontline weapons for the armored units of the Taiwanese Army, which could face the much more numerous and heavily armored Chinese regime land forces in an invasion.

Taiwanese media reported on Monday that military sources have confirmed the plan to purchase American tanks, a decision that has been debated for over a decade among Taiwan’s military planners and defense experts.

The debate reportedly came to a close as defense officials have decided to buy 100 M1A2 tanks from the United States with a budget of around Taiwan $20-30 billion (650-1000 million USD). The budget includes the costs for training initial crews and to purchase spare tanks parts for a full five years.

The Taiwanese Army has more than a thousand tanks in active service, all of which are older American tanks such as the M60 and M48. Most have undergone extensive modernization, which upgraded their sighting and gun aiming systems.

Fu S. Mei, a New York-based expert in military and security issues, said that the acquisition debate came to a close partially thanks to the influence of Yen Teh-fa, the current Minister of Defense who comes from an army background.

Yen, who once served as the commander of Taiwanese army’s Armor School, is known as a strong advocate for purchasing the M1 tanks despite the objections from Taiwan’s navy and air force, which downplay the strategic and tactical value of heavy main battle tanks in Taiwan’s defense.

The China’s People’s Liberation Army (PLA) fields thousands of tanks that are much more heavily armed and armored compared to Taiwanese Army’s current tanks. The 70-tonne M1A2 tank, which is still in current service in the U.S. military, will provide an adequate match against PLA’s modern tanks such as Type 99, should they come ashore in an invasion of Taiwan, according to Mei.