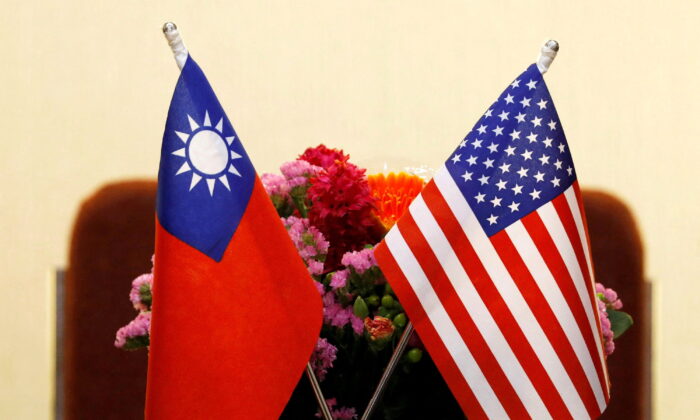 Flags of Taiwan and the United States are placed for a meeting in Taipei, Taiwan on March 27, 2018. (Tyrone Siu/Reuters)
Taiwan

The Taiwanese government on Friday welcomed its fifth prospective arms deal with the United States under the Biden administration.

In a statement, Taiwan’s Presidential Office said the deal includes the purchase of spare parts for tanks and combat vehicles, including contractor logistical and technical support, worth $108 million.

“[The deal] will not only help maintain the proper equipment of the army vehicles and implement combat readiness training tasks, but also effectively enhance the self-defense capability of the national army,” it stated.

The Presidential Office said the U.S. approval of the arms sale demonstrated that Washington placed “great importance” on Taiwan’s national defense needs and honored its security commitments to Taiwan.

“Taiwan will continue to demonstrate its self-defense determination, strengthen its self-defense capabilities, and safeguard its national security and the free and democratic way of life of its people,” it added.

The U.S. Defense Security Cooperation Agency (DCSA) said in a statement that it had delivered the required certification notifying Congress of the possible arms sale.

According to the DCSA, the proposed arm sale would help Taiwan maintain its security and political stability, as well as military balance, economic and progress in the region.

“The proposed sale will contribute to the sustainment of the recipient’s vehicles, small arms, combat weapon systems, and logistical support items, enhancing its ability to meet current and future threats,” it said, adding that it would help to enhance Taiwan’s interoperability with the U.S. and other allies.

However, the U.S.-Taiwan Business Council said the deal demonstrates that the Biden administration’s security policy on Taiwan no longer prioritizes “force modernization” of its military, instead focusing on sustainment and munition.

“The [Chinese People’s Liberation Army] will naturally focus on these emerging vulnerabilities, as they adapt to the shortcomings of U.S. policy,” council president Ruppert Hammond-Chambers said in a statement.

“The U.S. Taiwan Business Council again call on the Biden administration to provide strategic clarity on where U.S. forces will fill gaps in Taiwan’s defense brought on by these changes to U.S. policy,” he added.

China’s communist regime claims Taiwan as part of its territory and has vowed to conquer it by force if necessary. President Joe Biden has said that Washington will defend Taiwan if China attacks, but the U.S. policy on Taiwan remains unchanged.

According to the State Department, Washington does not support Taiwan’s independence and opposes any unilateral changes to the status quo from either side, although it would still provide Taiwan with the capabilities necessary to maintain its defense.