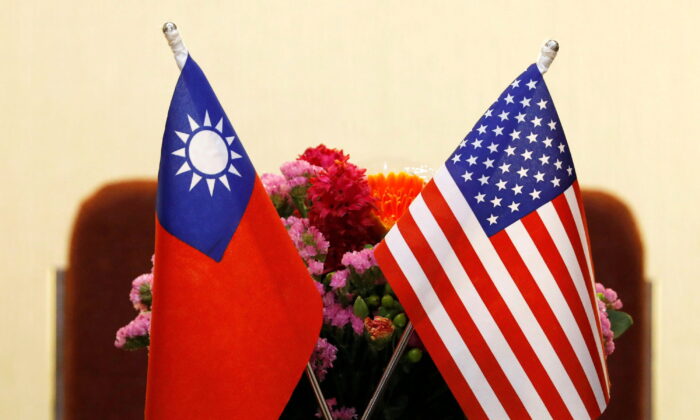 Flags of Taiwan and United States are placed for a meeting between U.S. House Foreign Affairs Committee Chairman Ed Royce speaks and with Su Chia-chyuan, President of the Legislative Yuan in Taipei, Taiwan, on March 27, 2018. (Tyrone Siu/File Photo/Reuters)
Taiwan

Taiwan to Purchase US Anti-Ship and Air-to-Air Missiles for $1.1 Billion

Taiwan on Friday welcomed its sixth prospective arms deal with the United States under the Biden administration, which will include anti-ship and air-to-air missiles, amid China’s military threats.

The U.S. Defense Security Cooperation Agency (DSCA) said in a statement that it had delivered the required certification notifying Congress of the possible arms sale, which totaled $1.106 billion.

The three contracts also include related military equipment, parts, as well as technical and logistic support services, according to the DSCA.

The DSCA stated that the proposed arms sale “will not alter the basic military balance in the region.”

Taiwan’s Presidential Office said the arms sale would help the island nation strengthen its self-defense and cope with the Chinese military pressure surrounding its border.

“We will not escalate conflicts or provoke disputes, but Taiwan will firmly demonstrate its determination and capability of self-defense to defend the nation’s sovereignty,” the office said in a statement.

US Takes ‘Limited Approach’ To Taiwan

The U.S.-Taiwan Business Council said that it opposed the United States taking a “limited approach” in its arms sale to Taiwan because the weapons offered are not new capabilities for the Chinese-claimed island.

“As the People’s Liberation Army (PLA) recently demonstrated in its mock blockade, the island faces a range of threats that require a range of capabilities,” council president Rupert Hammond-Chambers said in a statement.

“To deny the island the ability to mount a full defense will, over time, create new gaps in Taiwan’s defenses that the PLA can exploit. America’s current policy of strategic ambiguity does not allow for the U.S. to clarify that it would fill those gaps as they emerge,” he added.

President Joe Biden has said that Washington will defend Taiwan if China attacks, but the U.S. policy on Taiwan remains unchanged.

Washington does not support Taiwan’s independence and opposes any unilateral changes to the status quo from either side, but it would still provide Taiwan with the capabilities necessary to maintain its defense.

For the first time, Taiwan’s military shot down an unidentified civilian drone that entered its airspace near an islet near China’s Xiamen city on Thursday, after the government vowed tough measures against a rise in intrusions.

Taiwan Premier Su Tseng-chang said that Taiwan had repeatedly issued warnings and asked the Chinese Communist Party (CCP) “not to encroach on our doorstep.”

“They repeatedly ignored our warnings to leave and we had no choice but to exercise self-defense and shoot,” Su said. “This is the most appropriate reaction after repeated restraint and warnings.”

China has conducted military exercises throughout August, some of which have involved firing missiles over Taiwan and temporarily blockading the island from trade. The exercises began shortly after U.S. House of Representatives Speaker Nancy Pelosi visited Taiwan last month.

CCP forces have attempted to normalize incursions into the air and waters around Taiwan since Pelosi’s visit. Footage of Chinese drone missions has since circulated widely on Chinese social media, with some videos showing Taiwanese soldiers at their posts or throwing rocks at a drone.

Andrew Thornebrooke and Reuters contributed to this report.