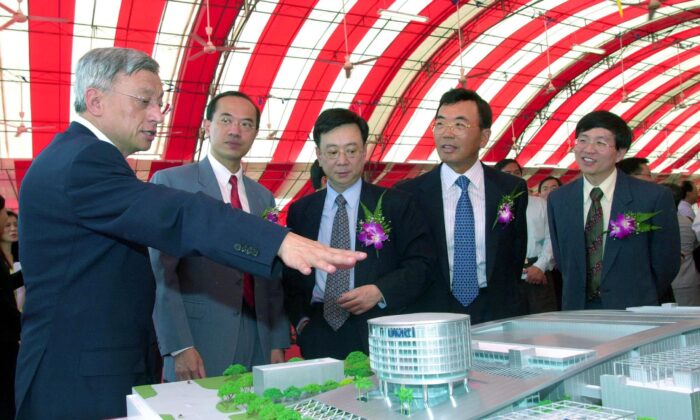 In a recent public speech, Robert Tsao (Cao Xingcheng), founder of United Microelectronics Corporation (UMC), the world’s second-largest semiconductor foundry, described the Chinese Communist Party (CCP) as a sort of “zombie virus” when it erodes humanity, and said its attempts to forcibly unify Taiwan would bring disaster to the world.

In an August 8 interview with Taiwan-based Formosa TV, Tsao wore a bullet-proof vest and had a steel helmet with him, as metaphors for topics related to safeguarding the individual and the nation.

“Protecting ourselves will increase the cost to the CCP to commit crimes against Taiwan and reduce its invasive rate,” Tsao said.

According to Tsao, Chinese people are actually fighting a horrible virus, “I named it ‘CCP Zombie Virus.’ Those infected will immediately be cut off from their relatives and turn into beasts from human beings, tearing each other apart, bloodthirstily.” He said.

Tsao pointed out that the key features of the CCP Zombie Virus are hatred, infighting, violence, and sophistry. These main characteristics are shown when one is infected. He called on the Taiwanese people to acknowledge the nature of the CCP.

Everyone could be driven crazy due to the CCP Zombie Virus, said Tsao, listing inhumane tragedies, such as, sons attacking their fathers, that happened during the Cultural Revolution, a sociopolitical movement launched by then CCP leader Mao Zedong that wreaked havoc on the entire Chinese nation between 1966 and 1976.

During that round of the CCP zombie virus outbreak, even Liu Shaoqi, the Party’s deputy leader, was tortured to death in prison at Mao’s behest, Tsao said.

As for the formation of the CCP zombie virus, Tsao believes it stemmed from the former Soviet Union. The Soviet October Revolution passed the violence, lies, and distorted communist ideologies to the CCP. Subsequently, Mao added the genes of infighting, hatred, and lawlessness that eventually formed the zombie virus of the CCP, and first fully manifested itself in the Cultural Revolution, Tsao said.

This national campaign resulted in 7.73 million unnatural deaths in China, according to a conservative estimate by experts cited in The Epoch Times editorial series “Nine Comments on the Communist Party.”

Taiwan Must Reject the CCP

Tsao believes that the CCP’s so-called unifying Taiwan could be nothing but the hegemony of the autocrats, the root cause of the Chinese people’s suffering.

It would be a terrible thing if the CCP forced Taiwan to be unified, “at least 70 to 80 percent of the people in Taiwan disagree with being ruled by the CCP, so it is likely that most of them would be killed as Taiwan independents, and the rest would be ‘re-educated’ as Chinese Ambassador to France Lu Shaye said. This is tantamount to being put in a ‘concentration camp on the Gulag Archipelago,’” Tsao said.

“The Gulag Archipelago,” a literary memoir by Soviet dissident Aleksandr Solzhenitsyn, published in 1973, recounts the system of prisons and forced labor camps in the former Soviet Union.

On August 5, Tsao, as one of the island nation’s most influential industrial tycoons, announced that he would donate NT$3 billion (about $100 million) to help strengthen Taiwan’s national defenses and upgrade its armaments while hoping to awaken the Taiwanese to fight for freedom and democracy.

He said those funds will be used to reward individuals or organizations, to promote national defense education, and to strengthen the war of awareness, psychological warfare, and public opinion.

At the press conference, Tsao called the CCP “gangsters” and “a mafia organization that exists in the form of a state” and vowed that “Taiwan must not be tolerant of becoming another Hong Kong.”

Beijing’s long-standing intimidation of Taiwan has infuriated the Taiwanese people, who have nearly reached the limit of their tolerance, Shiyi Qiu, an associate professor in the Department of Political Science at Tunghai University, told the Chinese language version of The Epoch Times on August 11.

An increasing consensus prevailing among Taiwanese people is that the ferocious nature of the CCP is beyond redemption, Qiu said.

In March, Tsao published an article through the media group of Ker Chien-ming, a veteran democratic progressive party member in the Legislative Yuan, saying that the two-state perspectives, proposed by Presidents Lee Teng-hui and Tsai Ing-wen, could bring long-term peace to Taiwan by guaranteeing its security and thwarting the CCP’s attempt to annex Taiwan.

Tsao also said that the CCP is the culprit of territory division and that only by dismantling the CCP “will China be able to restore democracy and freedom and see the daylight again.”

While Taiwan should fortify its warfare capabilities and cooperate with the United States and Japan to develop asymmetrical advanced weapons, he said.

UMC Business Has Setbacks in China

Tsao has set an example for the industrial community, which is, “Don’t be afraid of the CCP, it is neither a member of the capitalist society, nor a partner in international politics, economy, and trade, it is not qualified to impact the free trade environment. Businessmen should be courageous enough to say no to the CCP,” Qiu said.

Tsao, 73, along with TSMC’s Chairman Morris Chang were both coined as Taiwan’s semiconductor “heroes.”

UMC, Taiwan’s first integrated circuit company, was founded in 1982, and Tsao was appointed vice president, president, and chairman of the board of directors of the company. In 2001 UMC ranked as the world’s second-largest foundry.

Prior to founding UMC, Tsao served as vice president of the Industrial Technology Research Institute in Taiwan, and later was in charge of the Cross-Straits Business Development Foundation and a national policy advisor to the President’s Office.

In earlier years, he took the lead in setting up a wafer fab in mainland China and frequently traveled across Taiwan Strait as a representative of Taiwan’s successful business community.

However, “If we could do it all over again, I wish we hadn’t gone to China to help set up factories,” said Tsao, expressing remorse for UMC’s involvement in helping establish Hejian Technology in Suzhou, Jiangsu Province.

This occurred in 2001 and resulted in heavy losses for UMC, while Hejian Technology made millions in profits in a year, he told the Taiwanese financial media Wealth Magazine on Feb. 5, 2020.

Another plant in Xiamen, Fujian Province, which is in partnership with the local government, also caused UMC to lose  NT$11.7 billion (about $390 million) in 2018 due to high depreciation expenses, according to UMC’s annual report, Wealth Magazine reported in the article.

For the Taiwanese businessmen who are still doing business in China, Tsao suggested the word “surrender.” That is, if they can surrender benefits that might be paid for pandering to the CCP, they will gain freedom and dignity.

“They must decide for themselves whether to withdraw from China, but they have to have a yardstick in their hearts that acknowledges that the CCP is sick, so they will not get sick beside its sophistry,” he said.