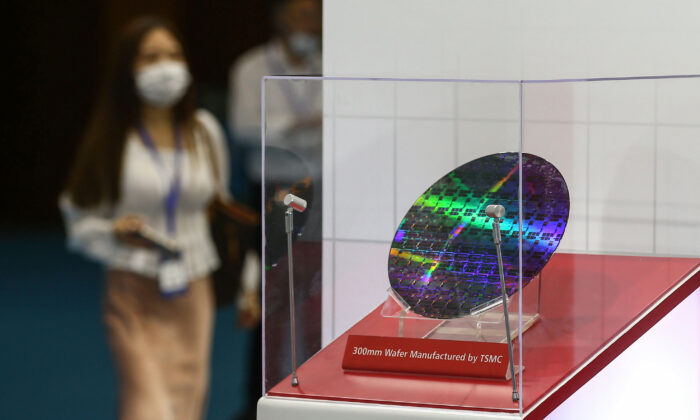 A chip by Taiwan Semiconductor Manufacturing Company (TSMC) on display at the 2020 World Semiconductor Conference in Nanjing in China's eastern Jiangsu Province on Aug. 26, 2020. (STR/AFP via Getty Images)
Asia & Pacific

Taiwan Sells Nearly Half of Its Exports to China, Reflecting China’s Dependence on Island for Semiconductors

Taiwan’s exports were booming in 2021, especially to China, which accounts for a solid 42.3 percent share of total exports. Taiwan officials have recently revised their 2021 estimate of economic growth from 6.09 percent to 6.28 percent, with both figures hitting an 11-year high. Experts say that Taiwan’s trade surplus with China continues to grow, indicating that China relies heavily on Taiwan.

According to the latest figures released by the Directorate General of Budget, Accounting and Statistics on Jan. 27, Taiwan’s economy grew at a rate of 6.28 percent last year, 1.9 percent higher than the forecast made in November.

In fact, the 6.09 percent growth rate estimated last year was already very high. Following release of the figures, Taiwan’s Vice President Lai Ching-te said on Dec. 28 that Taiwan’s epidemic control and prevention in the past two years was relatively smooth. Thus, the country was less affected by the epidemic and the economy had performed better than in other countries. Taiwan has ranked first amongst the “Four Asian Tigers” (Singapore, Taiwan, South Korea, and Hong Kong) for two consecutive years. Wu Daren, CEO of the Taiwan Economic Center at National Central University, said that the main reason for Taiwan’s outstanding economic performance last year was that the country’s manufacturing exports and private investments were both very strong.

The main growth engine of Taiwan’s economy is exports. According to investment information platform MacroMicro, Taiwan’s exports account for more than 60 percent of the total GDP, with electronic components, information and communications, and audio-visual products as the main export products.

The most important source of private investment is the continued expansion of investment by technology companies such as TSMC and related supply chains. TSMC alone invested $30.04 billion last year, accounting for approximately 4 percent of Taiwan’s total $760 billion economy. In addition, the telecom industry continues to invest in 5G infrastructure, the airline industry is expanding its capacity and investing in the localization of its supply chain, and the government is promoting investment in public green energy facilities; all of which are making important contributions to economic growth.

In addition, Wu said, China’s control of energy consumption and the outbreak of epidemics in Southeast Asia have also brought significant benefits to Taiwan; and the increase in domestic demand in Taiwan has prompted many industry players to start expanding their plants, which in turn has boosted the construction industry.

Taiwan’s largest export market is China. According to the Ministry of Finance, the Chinese market (including Hong Kong) accounted for 42.3 percent of Taiwan’s total exports last year, slightly lower than the 10-year high of 43.9 percent set in 2020, and far ahead of the second and third largest export markets, ASEAN and the United States, which accounted for 15.7 percent and 14.7 percent respectively.

According to data from the General Administration of Customs of the People’s Republic of China, Taiwan’s total exports to China (excluding Hong Kong) amounted to $249.999 billion last year, up 24.7 percent year-on-year, while Taiwan’s total imports from China amounted to $78.364 billion, up 30.4 percent year-on-year. Taiwan’s trade surplus with China reached $171.6 billion, an increase of $31.1 billion from 2020.

Taiwan economist and veteran political and economic commentator Wu Jia Long told The Epoch Times that the fact that Taiwan enjoys a trade surplus with China, which continues to grow, does not mean that Taiwan is dependent on China, but that China is dependent on Taiwan. In terms of the technology supply chain, Taiwan is upstream and China’s production line is downstream. Taiwan’s trade surplus with China reflects China’s demand or dependence on Taiwan.

In May 2021, Taiwan’s Ministry of Economic Affairs devoted a prominent headline to refute former President Ma Ying-jeou’s interpretation of “Taiwan’s dependence on China,” which stated that “the growth of exports to China is driven by semiconductor exports, but it is China’s dependence on Taiwan.”

The Directorate General of Budget, Accounting and Statistics has maintained its November forecast of 4.15 percent economic growth for this year, but the outbreak of the omicron variant since the beginning of the year has raised concerns about whether the economy will be able to maintain its 4 percent growth rate this year.

However, Wu Jia Long said that the United States and China have shifted from rapprochement to confrontation. With the United States and Chinese economies decoupling, manufacturing industries pulling out of China, and Taiwan facing structural changes that usually last around 20 years, he estimates that the “Taiwan economic miracle” that lasted for 20 years in the second half of the last century may happen again.

Wu said that in the case of high growth, people would be worried that the base period has already risen enough and it would not be easy to maintain the same high growth in the next year. However, now we are facing a structural change, Taiwanese businessmen are returning in large numbers, and capital is flowing back, “we have seen capital flowing out every year in the past, this outflow that has lasted for nearly 20 years, it is impossible that it will be over in two years.”

Wu emphasized that it was inevitable for Taiwanese businesses to leave mainland China, with some going back to Taiwan and some to other countries. As for the reasons for the return, he said, “On the one hand, Taiwanese businessmen have to avoid U.S. tariffs by re-exporting their goods. On the other hand, the Chinese Communist Party’s financial shortage has reached the point where as the saying goes: “so starving for food, that one kills the chicken to get the eggs” and will definitely take action against Taiwanese businesses and the mainland firms.

“Apart from the return of Taiwanese businesses, the semiconductor and green energy industries will also continue to attract investment. Not only that, but Taiwan has the most complete supply chain in the world, so emerging technology sectors such as artificial intelligence, big data, meta-universe, and third-generation semiconductors will all attract significant investment.”

Wu did not give a specific estimate for Taiwan’s economic growth in 2022, but he said that “There is no need to worry about Taiwan’s domestic demand, as the second wave of Taiwan’s economic miracle, which lasted for 20 years in the second half of the last century, will come again, and we can call it ‘Taiwan Economic Miracle 2.0.'”

Bloomberg reported on January 27 that TSMC will build new factories this year to ease the semiconductor shortage, with investment expected to reach $40 billion to $44 billion. This investment is equivalent to about 5 percent of Taiwan’s $760 billion economy, so the outlook for Taiwan’s growth in 2022 remains optimistic.

In an interview with The Epoch Times, researcher Liu Pei-jin of the Taiwan Institute of Economic Research said that, in light of the trend of digital and energy transformation, semiconductor applications are everywhere, and demand is rising. The semiconductor market will continue to grow this year, both in Taiwan and globally, and TSMC, a leader in advanced manufacturing processes, will see even greater growth this year.

She also said that the U.S.-China technology war would provide more business opportunities for Taiwan. With the United States imposing various controls and restricting access to critical semiconductor equipment or chips through its allies, China’s semiconductor industry is stagnating, and its end-use markets are inevitably dependent on Taiwan’s semiconductor supply.