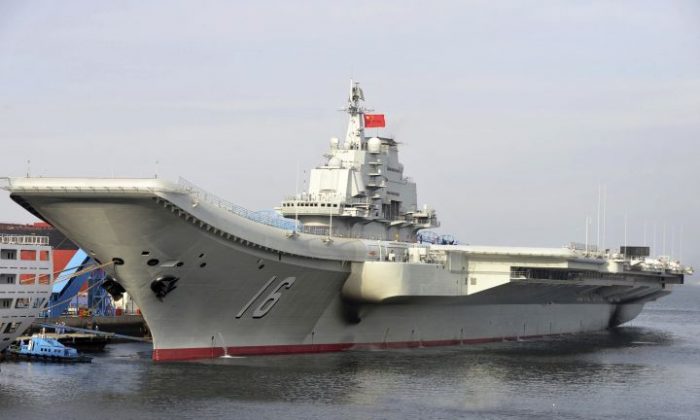 The Taiwanese government has issued a warning on Tuesday about Chinese warships, including the new Liaoning aircraft carrier, patrolling close to its maritime territory.

The Chinese warships, led by the Liaoning, were seen sailing toward the island province of Hainan via the South China Sea, Reuters reported.

“The threat of our enemies is growing day by day,” Taiwan’s Defense Ministry said on Dec. 27, referring to the Chinese Communist Party’s naval capabilities. Reuters reported that while the Chinese regime has not elaborated on what the Liaoning is doing, Taiwan said the “aircraft carrier skirted waters outside of its eastern air defense identification zone.”

“We should always be maintaining our combat alertness,” Taiwan Defence Minister Feng Shih-Kuan told the news agency. “We need to strengthen the training (of our soldiers) so that they can not only survive in battle but also destroy the enemy and accomplish the mission.”

His warnings come as hardline Chinese communist state-run mouthpiece the Global Times—which has a history of making dubious, threatening statements against the United States and its allies—published a report on Christmas, saying that the aircraft carrier Liaoning could soon be patrolling near the U.S. West Coast, without elaborating.

The Global Times said Chinese naval capabilities need to be built up, including more aircraft carriers. It added that naval supply bases in South America should be implemented for the carriers.

“When China’s aircraft carrier fleet appears in offshore areas of the US one day, it will trigger intense thinking about maritime rules,” the paper wrote. “If the fleet is able to enter areas where the US has core interests, the situation when the US unilaterally imposes pressure on China will change.”

Tensions around Taiwan have increased in recent weeks after President-elect Donald Trump received a phone call from the island’s president that upset Chinese Communist officials.

“We continue to closely monitor developments in the region. We do not have specific comments on China’s recent naval activities, but we continue to observe a range of ongoing Chinese military activity in the region‎,” Pentagon spokesman Gary Ross told Reuters.