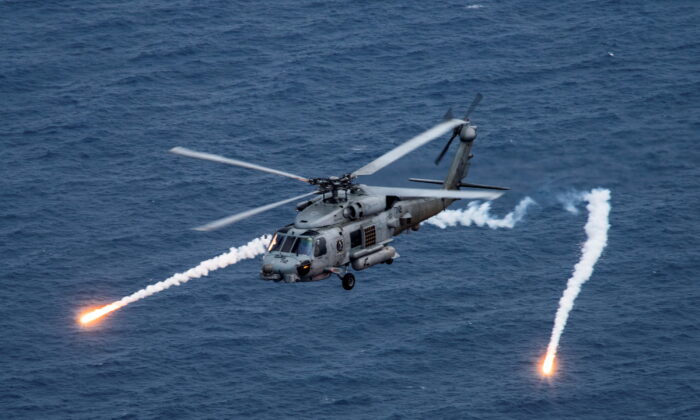 Taiwan may cancel its plan to acquire anti-submarine warfare helicopters from the United States because the price was “too high,” its defense minister said Thursday.

Defense minister Chiu Kuo-cheng told parliament that the deal to buy 12 MH-60R anti-submarine helicopters is likely to be terminated because the cost was “beyond our capability,” Focus Taiwan reported.

Taiwan initially allotted NT$34 billion ($1.15 billion) for the chopper deal, but according to local media reports a Taiwanese defense expert in February said that Washington had rejected the sale, saying it was incompatible with the island’s “principle of asymmetric combat power.”

But the Raytheon Technologies Stingers anti-craft missiles delivery to Taiwan has reportedly been delayed due to increased demand for the weapons in Ukraine’s defense against Russia.

“It is true that due to the Russia-Ukraine war, we have been told recently that the delivery of Stingers could be delayed,” Chiu said, adding that his ministry has prepared contingency plans to safeguard Taiwan’s combat readiness amid the delay.

Meanwhile, the Defense Ministry said Monday that it was considering alternative weapons options after the U.S. informed the M109A6 Paladin self-propelled howitzers purchased by Taiwan would not be delivered until at least 2026.

According to local reports, the first eight Paladins were supposed to be delivered next year, followed by 16 more in 2024 and 2025, but Washington said they had been delayed due to a “crowded” production line for the weapons. The deal totaled $750 million.

“Considering the need for precise firepower to defend Taiwan and Penghu, we have cooperated with the U.S. to research and develop sophisticated alternatives to meet actual operational needs,” it stated.

Tensions between self-ruled Taiwan and the regime in Beijing have been escalating, with China claiming the island as part of its territory and has vowed to conquer Taiwan by force if necessary.

According to Japan’s Defense Ministry, the Liaoning and its five-ship strike group were first spotted approximately 350 kilometers (217 miles) southwest of Nagasaki prefecture’s Danjo islands on May 1. Another destroyer and a frigate joined the flotilla late on May 1 and early on May 2.