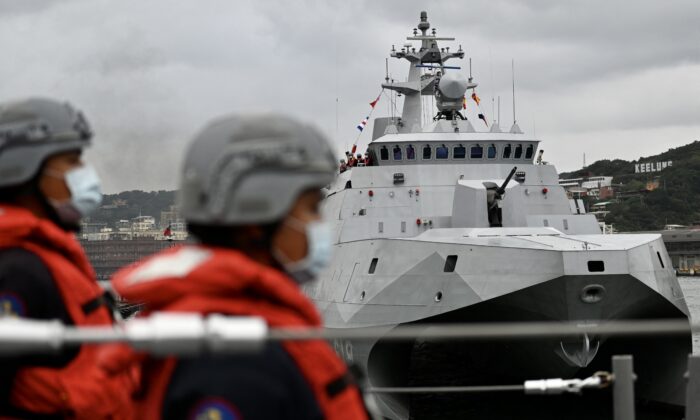 Taiwan soldiers stand next to the domestically produced corvette class vessel Tuo Chiang (R) during a drill at the northern city of Keelung on Jan. 7, 2022. (Sam Yeh/AFP via Getty Images)
Taiwan

TAIPEI, Taiwan—Beijing may be deploying a new strategy to test Taipei’s reactions after a small Chinese civilian plane flew very close to one of Taiwan’s outlying islands, Taiwan’s defense ministry said on Feb. 15.

The aircraft did not enter Matsu’s air space, the ministry said, adding the plane entered what it called Taiwan’s “defense reaction zone.”

“On the Dongyin incident, of course, we have made a preliminary judgment and we cannot rule out that they are using civilian aircraft to test the responses of our military,” Shih Shun-wen, spokesperson for Taiwan’s defense ministry, told reporters on Tuesday.

“The military will definitely take corresponding actions, but it will take various contingency actions without there being a minor incident which sets off a war,” Shih added.

He did not elaborate on what measures Taiwan’s military took in response to the incident, citing military confidentiality.

The Chinese Communist Party (CCP) sees Taiwan as part of its territory that must be united with the mainland, by force if necessary. As a result, China has resorted to a number of different “gray zone operations,” such as flying military jets into Taiwan’s air defense identification zone (ADIZ), in order to wear down the island’s air and maritime forces while testing the island’s defense capabilities.

However, internationally, Taiwan is widely recognized as a de facto independent body, where Taiwanese people elect their own leaders through democratic elections.

For the past two years, China has flown military jets into Taiwan’s ADIZ off its southwestern and southern coasts on a regular basis. According to Taiwan’s defense ministry, there were about 380 sorties in 2020, which more than doubled to 961 sorties in 2021.

Such military harassment has continued in 2022. Chinese military planes have entered the island’s ADIZ on eight different days this month, according to the ministry. The most recent incursion happened on Feb. 14, when a Chinese anti-submarine warfare plane and J-16 fighter jet entered the island’s southeast ADIZ.

China’s hawkish state-run media Global Times, in an editorial published on Jan. 25, warned that the number of incursions in 2022 “will only be more than last year’s.” It also threatened that Chinese warplanes “will sooner or later fly over” Taiwan.

Last week, the Biden administration released its long-awaited Indo-Pacific Strategy, which seeks to maintain peace and security across the Taiwan Strait in a bid to counter the Chinese regime’s aggression in the region.

“We will also work with partners inside and outside of the region to maintain peace and stability in the Taiwan Strait, including by supporting Taiwan’s self-defense capabilities, to ensure an environment in which Taiwan’s future is determined peacefully in accordance with the wishes and best interests of Taiwan’s people,” the strategy reads.

Currently, the United States has no formal diplomatic ties with Taiwan, ever since Washington changed its diplomatic recognition in favor of Beijing in 1979.

However, the two sides have enjoyed a robust relationship based on the Taiwan Relations Act, a law that authorizes the United States to provide the island with military equipment and weapons for self-defense.

Reuters contributed to the article.