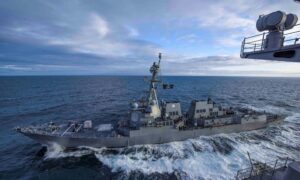 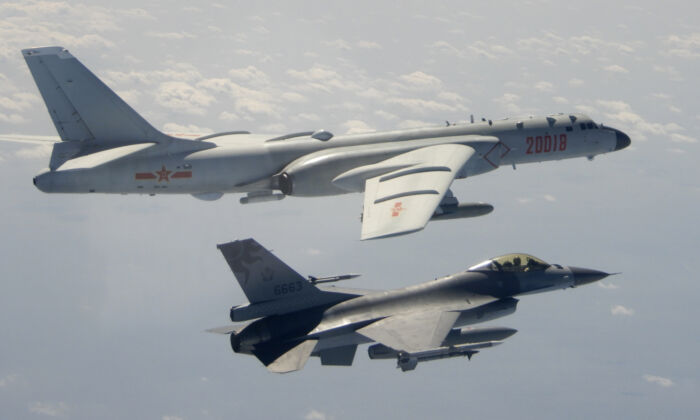 A Taiwanese Air Force F-16 in foreground flies on the flank of a Chinese People's Liberation Army Air Force (PLAAF) H-6 bomber as it passes near Taiwan on Feb. 10, 2020. (Republic of China (ROC) Ministry of National Defense via AP)
International Relations

Taiwan warned in its annual defense report that the Chinese regime could “paralyze” the island’s defenses and fully monitor its deployments.

Taiwan’s National Defence Ministry identified more serious threats from the Chinese military in its latest report. The Ministry has submitted the report on Chinese military capabilities and next year’s defense budget to the legislature on Aug. 31.

This year’s report said that the Chinese military could launch what it termed “soft and hard electronic attacks.” This includes blocking communications across the western part of the first island chain, the string of islands that run from the Japanese archipelago, through Taiwan, and down to the Philippines.

China “can combine with its internet army to launch wired and wireless attacks against the global internet, which would initially paralyze our air defenses, command of the sea and counter-attack system abilities, presenting a huge threat,” according to the report.

With precision missile attacks that can hit anywhere on the island, China is also capable of “paralyzing” Taiwan’s military command centers and combat capacity of its naval and air forces, it said.

The report noted the Chinese military is still unable to conduct large-scale landing operations due to a lack of transport abilities and logistical support. However, Beijing is working to boost these capabilities.

The Chinese regime regards the self-ruled island as part of its territory, and has suggested the use of force to bring democratic Taiwan under its control.

In addition, the Ministry mentioned both the regime’s threats of using disinformation to influence public opinion and repeated incursions into its air defenses zone. According to the Ministry’s real-time data, Taiwan has detected over 400 Chinese patrols in the past eight months, more than the figures for the whole of 2020.

A Taiwanese military expert analyzed that the report is raising the alarm on the regime’s military preparation and also calling for political and diplomatic supports from the international community.

Lee Cheng-hsiu, a senior assistant research fellow in the National Security Division of the National Policy Foundation in Taipei, told The Epoch Times that this report is to “raise the alarm of the Chinese Community Party’s (CCP) military preparation and ambitions for aggression against Taiwan.”

“It called on the international community to recognize the risk of armed conflict across the Taiwan Strait,” Lee said on Wednesday. “On the other hand, it’s reminding Taiwanese to be on guard against CCP’s force threats.”

Lee said the Biden administration still believes the Chinese regime doesn’t have the ability to attack Taiwan, adding that the United Staets hopes the island could improve its defense ability and defuse tensions through dialogues.

Last month, the U.S. State Department approved $750 million worth of military equipment to Taiwan, saying the support is the basis for maintaining regional stability. In 2020, the Trump administration also approved a $600 million weapons sale.

In the face of CCP’s stepped-up military activities, Taiwan proposed the biggest defense budget of NT$372.6 billion ($13.4 billion) for 2022, with an extra $1.4 billion on new fighter jets, according to Taiwanese state-owned Central News Agency.