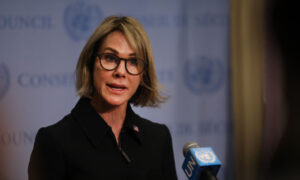 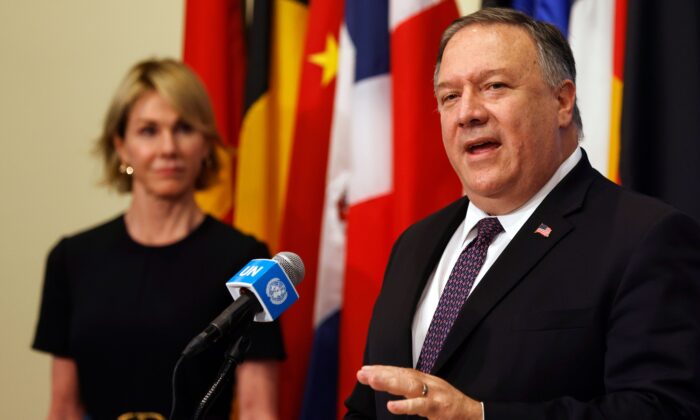 U.S. Secretary of State Mike Pompeo is flanked by U.S. Ambassador to the United Nations Kelly Craft as he speaks to reporters at the United Nations headquarters in New York, on Aug. 20, 2020. (Mike Segar/POOL/AFP via Getty Images)
China-US News

Secretary of State Mike Pompeo said on Monday that his recent decisions about Taiwan were made with great consideration, while reiterating the threat posed by the Chinese Communist Party (CCP) to the world.

Pompeo was answering a question about his recent decisions to lift decades-old “contact guidelines” on how U.S. officials should interact with their Taiwanese counterparts, to have U.S. Ambassador to the United Nations Kelly Craft visit the self-ruled island this week, and to issue a joint statement on mass arrests in Hong Kong.

“I wish these things had been done a long time ago. These weren’t rushed. These were considered efforts that we made and they’re an important part of the strategy that we’ve laid out with respect to how to protect and preserve American freedoms vis the challenge that the Chinese Communist Party presents,” Pompeo stated.

Fact: the biggest threat to @UN integrity and international human rights is the CCP’s efforts to pervert norms and co-opt these institutions. I took it seriously from Day 1, and we fought back. pic.twitter.com/OaQ8lnTKFK

Pompeo made the remarks while speaking at the American international broadcaster Voice of America’s headquarters in Washington on Jan. 11.

Beijing has lashed out at the Trump administration over the two moves regarding Taiwan, which the Chinese regime claims is part of its territory. China’s hawkish state-run media Global Times, in recent editorials, slammed the moves as the Trump administration’s “last-ditch madness” while threatening war and suggesting actions in the coming days to nail Pompeo to the “pillar of shame.”

Because of efforts by Beijing to limit Taiwan’s international influence, Taiwan currently only has 15 diplomatic allies. The United States is currently not one of them, after the Carter administration switched diplomatic recognition in favor of Beijing in 1979. Despite the lack of a formal relationship, Washington has maintained a robust relationship with the self-ruled island based on the Taiwan Relations Act (TRA).

Pompeo’s lifting of restrictions has been welcomed not only by U.S. lawmakers but also in the United Kingdom. Luke de Pulford, a member of the UK Conservative Party Human Rights Commission, stated that the UK should follow Pompeo’s decision via Twitter on Jan. 9.

Pompeo also reiterated his view that Red China should be approached according to “distrust and verify,” a policy that he first brought up while giving a speech at the Richard Nixon Presidential Library and Museum in California on July 23 last year.

To make his point, Pompeo said the recent arrests of more than 50 activists, former lawmakers, and politicians in Hong Kong was more evidence that Beijing has “walked away” from its promise to Hongkongers. Those arrested are accused of “subverting state power” under Hong Kong’s national security law.

When Hong Kong, a former British colony, returned to Chinese rule in 1997, the one-party communist state promised that Hongkongers would enjoy freedoms and rights not protected in mainland China for at least 50 years.

Since then, the CCP has progressed its own agenda and broken its promise, most recently by implementing the draconian security law in June last year, which penalizes vaguely-defined crimes such as subversion and secession with a maximum of life imprisonment.

“The Chinese Communist Party has a clear intent for hegemonic dominance and we have an obligation and responsibility to the American people, and frankly to freedom-loving people around the world, to make sure that that is not the world that our children and grandchildren live in,” Pompeo concluded.