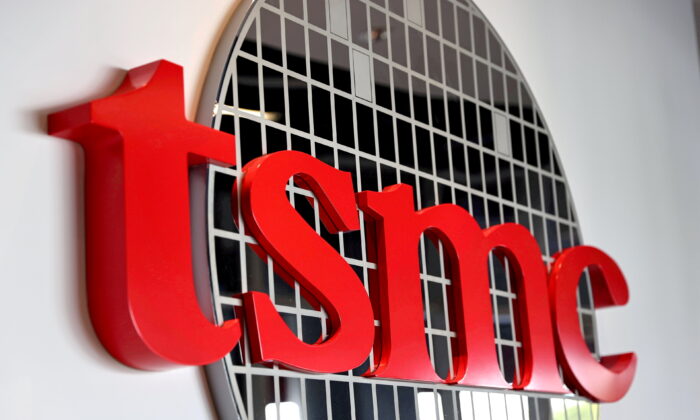 The logo of Taiwan Semiconductor Manufacturing Co. (TSMC) is pictured at its headquarters, in Hsinchu, Taiwan on Jan. 19, 2021. (Ann Wang/Reuters)
Business & Economy

China’s top diplomat recently said Taiwan is a “wanderer” that will eventually “come home” to China. Such rhetoric by the Chinese Communist Party (CCP) officials as well as increased Chinese military aircraft incursions near Taiwan in recent months have spiked a new wave of fears and media speculation that a Chinese invasion of the island may not be far away.

Some media commentators believe that the tension in the Taiwan Strait stands as one of the world’s biggest geopolitical risks in 2022. China claims sovereignty over Taiwan and in the past two years has stepped up threats to take control of the island.

Such a move would inflict economic pain on many countries as Taiwan is a crucial hub for the global semiconductor supply chain, according to experts. A Chinese military takeover would cause severe supply shocks across many industries that heavily rely on chips made in Taiwan.

Taiwanese companies, both large and small, account for about 65 percent of global sales of outsourced chips. Taiwan Semiconductor Manufacturing Company (TSMC), the crown jewel of the island, alone generates 56 percent of the global revenues.

“The situation is similar in some ways to the world’s past reliance on Middle Eastern oil, with any instability on the island threatening to echo across industries,” says Keith Krach, former undersecretary of state who played a crucial role in the warming of relations with Taipei under the Trump administration.

TSMC ranks as one of the world’s most valuable companies, with a market capitalization of nearly $600 billion.

“To put it in perspective GDP of Taiwan is around $750 billion. That certainly makes the China-Taiwan tensions more combustible,” Krach noted.

Apple is TSMC’s biggest customer. Other notable companies that depend on TSMC include AMD, Qualcomm, NVIDIA, and Intel.

While the world’s major chipmakers race to produce the smallest chips possible; only TSMC and Korea-based Samsung can produce the cutting-edge standard, which is five nanometers. TSMC recently announced that it would start producing the next-generation 3-nanometer chips in the second half of this year.

China, by contrast, is sitting at the lower end of the semiconductor value chain. It only holds 5 percent of the market share in global sales and relies heavily on foreign suppliers for advanced chips.

China is at least 15 years behind in the semiconductor space, according to industry estimates. Seeing this gap, Beijing has been aggressively using shortcuts to catch up, such as stealing trade secrets and recruiting talents from abroad. As part of the strategy, Beijing has also increased cyberattacks against Taiwanese semiconductor firms in the past few years.

A recent paper published by the U.S. Army War College recommended that Taiwanese authorities “destroy facilities belonging to” TSMC in the face of a Chinese invasion, as a deterrence strategy. The paper claimed such a move would “produce a major economic crisis” in China whose tech sector is heavily dependent on TSMC.

Since 2020, the People’s Liberation Army has increased its military activity in the Taiwan Strait, with frequent flyovers into Taiwan’s air defense zone.

Such a move, however, Hammond-Chambers added, would be political suicide for Chinese leader Xi Jinping especially before his expected election for an unprecedented third term at the Communist Party’s National People’s Congress in autumn.

Beijing uses threatening rhetoric consistently, he said. “And to me, it doesn’t represent a raising intention” of an actual military attack.

China’s Foreign Minister Wang Yi accused the United States and other countries of trying to “use Taiwan to control China.”

“Taiwan is a wanderer who will eventually come home, not a chess piece to be used by others. China must and will be reunified,” he threatened in a recent speech.

“Labelling Taiwan a ‘wanderer’ is a classic bullying move,” according to Krach.

“Tyrants can’t persuade, so they bully, especially when their own deck of cards is weaker than they want others to think,” he said.

It’s unclear if Beijing will embark on a military adventure over Taiwan this year. But its growing ambitions goes beyond being a threat to the island’s 23.5 million people and to the global supply chains, according to Taiwan President Tsai Ing-wen.

“[I]f Taiwan were to fall, the consequences would be catastrophic for regional peace and the democratic alliance system,” she warned in a recent op-ed for Foreign Affairs.

“It would signal that in today’s global contest of values, authoritarianism has the upper hand over democracy.”