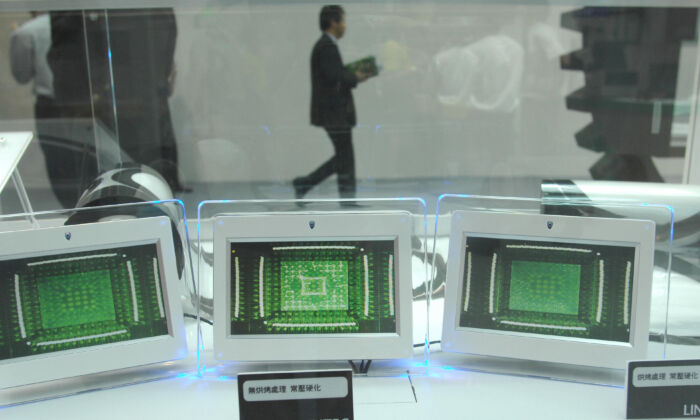 A visitor walks past a booth featuring micropchip testing during the first day of the three-day Semicon semiconductor exhibition at the Taipei World Trade Centre in Taipei, Taiwan, on September 30, 2009. (PATRICK LIN/AFP via Getty Images)
Taiwan

“The illegal poaching of Taiwan’s high-tech talent by Chinese companies has severely impacted our international competitiveness and endangered our national security,” the Ministry of Justice Investigation Bureau said in an online statement.

The bureau raided 10 Chinese companies and their research and development centers in four cities across the island, including Hsinchu, the capital of the island’s chip industry, according to the statement. These firms operate in Taiwan without approval, it added. The bureau said it summoned over 70 people and searched 20 facilities from May 23 to 26.

The security of the chip industry has become a main concern of authorities in the tech powerhouse of Taiwan, which makes the majority of the world’s most advanced semiconductor chips, an indispensable part of everything from mobile phones to military jets.

Despite its leading position, the island is grappling with a brain drain to China. Taiwan lost an estimated 3,000 semiconductor engineers—accounting for one-tenth of the island’s talents in the chip industry—to China, according to a 2020 research published by Taiwan’s Mainland Affairs Council.

China’s efforts to secure chip engineering talent primarily from Taiwan has intensified in recent years after the ruling Communist Party set a goal of achieving self-sufficiency in advanced chips, an objective under a 10-year economic program known as Made in China 2025. To boost the industry, the Chinese Communist Party set up a National Semiconductor Fund of $22.19 billion in 2014, and announced another investment of $32.66 billion in 2019.

Read More
What Is the ‘Made in China 2025’ Program That Is the Target of US Tariffs?

In response, Taiwan’s Investigation Bureau has launched investigations into around 100 Chinese companies suspected of illegally poaching semiconductor engineers and other tech talent, according to an April report by Reuters, citing a senior official of the bureau.

On May 20, Taiwan’s legislature passed amendments to its national security act and a law governing relations with China. The amended national security legislation criminalized “economic espionage,” setting out a punishment of up to 12 years in prison and a fine of up to $3.4 million for people illegally transferring core technology from the island.

Taiwan has prohibited Chinese investment in some parts of the semiconductor supply chain, including chip design, and requires reviews for other areas such as chip packaging.

In March, the bureau raided eight Chinese companies to counter “the CCP’s illegal activities of talent-poaching and secret-stealing.”