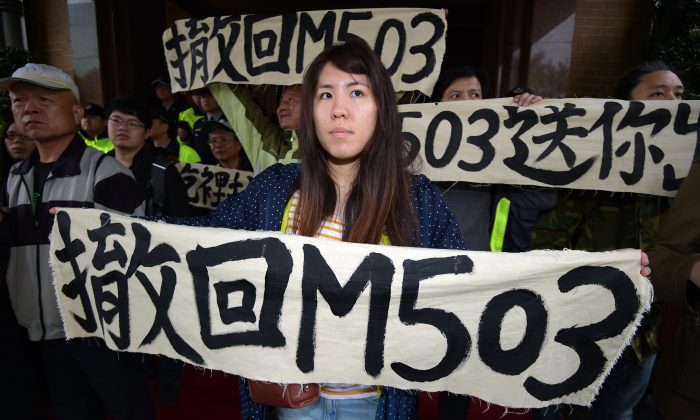 Taiwanese activists display banners that read “oppose the M503” at the Parliament during a protest in Taipei on March 27, 2015. China is now activating the controversial M503 air route that was first declared in 2015. (Same Yeh/AFP/Getty Images)
Asia & Pacific

While Taiwan has been working to rally international opposition to a new commercial aviation route activated by the Chinese regime that threatens the security of the island nation, the UN organization responsible for governing international aviation issues has remained silent.

The air route known as M503 was unilaterally declared by China in January 2015 and became controversial due to the fact that it is only 4.2 nautical miles (4.8 miles) from the centerline of the Taiwan Strait, at its nearest point. Possibly due to the Taiwanese public’s strong reaction against it, the Chinese regime reluctantly paused the activation of the controversial part of the air route in negotiations with Taiwan in March 2015.

On Jan. 4 this year, however, the Chinese regime reneged on its earlier promise and formally activated the M503 air route without further negotiations with Taiwan. The move is being seen in Taiwan as an act of provocation at a time when the Chinese regime is escalating its political and military pressure.

The air route cuts straight north to south through the highly militarized Taiwan Strait and is placed extremely close to a number of restricted airspaces on Taiwan’s side that have been declared off-limits by the Taiwanese air force for decades. Even more controversial are the three West-East corridors (W121, W122, W123) within the M503 air route that could allow Chinese aircraft to routinely fly directly in Taiwan’s direction. Since its activation in early January, the air route has seen occasional civilian air traffic consisting mostly of commercial jets from China’s airlines.

In response to the activation of M503, the government of President Tsai Ing-wen has submitted a protest to China and also tried to gather support among Taiwan’s diplomatic allies and contacts on the international stage. Taiwanese diplomats around the world have scrambled to voice Taiwan’s disapproval of the air route.

“Recent unilateral actions by China—including M503 flight route and increased military exercises—are destabilizing and should be avoided,” said Tsai in a Jan. 4 tweet.

The firm response this time is a marked departure from Tsai’s earlier position in 2015 when her party was in opposition. At that time the Tsai-led Democratic Progressive Party took a low-key approach to the issue and did not assertively protest against the declaration of M503.

Taiwan’s international campaign against M503 has seen at least some results. On Jan. 24, Japan’s Ministry of Foreign Affairs spokesperson Norio Maruyama responded to the question of M503 by saying that Japan’s position is that “ensuring the safety of private-sector aircraft is of the utmost importance,” suggesting in this way that flying commercial aircraft through the heavily militarized strait should be avoided and thus supporting Taiwan’s position.

Also, during a session of the European Parliament’s Subcommittee on Security and Defense (SEDE), Polish member of the EU parliament and the chair of the SEDE Anna Fotyga reportedly criticized China’s M503 as a threat to Taiwan’s security. She said that the new air route would jeopardize the safety of EU citizens traveling through the region.

Taiwan’s protest of M503, however, has so far been ignored by the International Civil Aviation Organization (ICAO), the agency under the United Nations that is responsible for international aviation affairs, such as the issue of air routes.

Under ICAO’s Air Traffic Services Planning Manual, changes to any air route should be made only after they have been coordinated with all concerned parties. Although China was widely condemned internationally for not consulting with Taiwan, ICAO does not have an enforcement mechanism to stop China.

Since Taiwan is not a member of the U.N., it is also not a member of the ICAO, despite the fact that it has repeatedly expressed a desire to participate like other countries in ICAO meetings to protect aviation safety. Taiwan’s international supporters, such as many members of the U.S. Congress, have repeatedly called for ICAO to allow Taiwan’s participation. The U.S. State Department has so far remained quiet on the issue.

‘An Attempt to Belittle Taiwan’

Prominent national security voices in Taiwan, such as former Minister of Defense Michael Tsai, have criticized the activation of M503 as the Chinese regime’s latest transgression and have called for the Taiwanese government to take a more assertive posture against it. In an April 2015 interview with The Epoch Times, Michael Tsai blasted China’s declaration of the M503 air route at the time as an attempt to belittle Taiwan and to undermine its security.

On the other side of the Taiwan Strait, the People’s Liberation Army fields hundreds of military aircraft and has thousands of missiles pointed Taiwan’s way, and experts say that a civilian air route so close to the centerline will significantly squeeze the time and depth for Taiwan to react in response to hostile actions from the Chinese regime.

Michael Tsai also pointed out that China’s imposition of the M053 air route on Taiwan is reminiscent of its earlier attempt at establishing an Air Defense Identification Zone (ADIZ) in the East China Sea in 2013. The move attracted an immense international backlash from across the Asia-Pacific region that eventually forced the Chinese regime to back down. Just as in the case of the M503 air route, however, the Chinese regime only agreed to “pause” the implementation but did not abandon it. The ADIZ could easily be activated again at some later date.