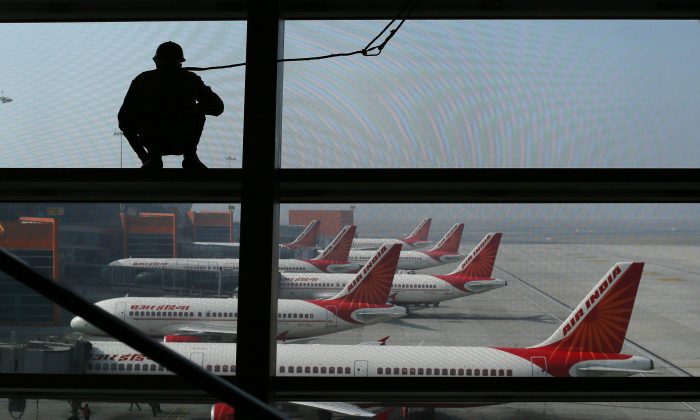 An Indian window cleaner stands on a beam overlooking Air India aircraft as they stand on the tarmac at Indira Gandhi International Airport in New Delhi on Nov. 17, 2012. (Andrew Caballero-Reynolds/AFP/Getty Images)
Asia & Pacific

Air India has found itself facing criticism after it changed Taiwan’s name on its website to “Chinese Taipei.” Taiwan lodged a protest with the airline and said that the move is a gesture of succumbing to “unreasonable and absurd pressure” from China.

The Indian flag carrier said that it changed Taiwan’s name in late June based on a response it received from India’s Ministry of External Affairs. The airline does not have any direct flight to Taiwan, but it has a code share with Air China, which flies to Taiwan. As a result, Taipei’s Taoyuan International Airport is listed on Air India’s website under “Chinese Taipei.”

Taiwan’s representative office in New Delhi filed a protest with Air India on July 5. In a strongly worded statement, the representative office said it hopes the “Indian government can provide firm support to its public services and private businesses to defend themselves from a foreign country’s bully actions.”

Taiwan also sees Air India’s move as “a gesture of succumbing to the unreasonable and absurd pressures from China,” according to Chung Kwang Tien, representative of Taiwan’s Economic and Cultural Centre in India (TECC).

Since April 25, Beijing has sent letters to 44 international air carriers, demanding them to rename Taiwan as part of China within 30 days and said that “measures” will be taken to deal with airlines that fail to comply. It later extended the deadline to July 25.

President Donald Trump has strongly criticized Beijing’s attempt to rename Taiwan as “Orwellian nonsense” and has asked U.S. airlines not to comply with the demand.

Many international airlines, including Air Canada, Singapore Airlines, Emirates and others have submitted to Beijing’s demand and changed Taiwan’s name on their websites, some of which now directly imply Taiwan is a province of China.