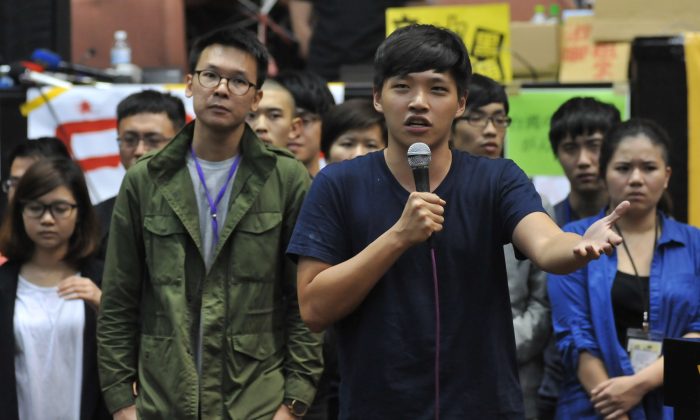 Student protest leader Chen Wei-ting (R) speaks during a protest against a contentious trade agreement with China inside the Legislative Yuan in Taipei on April 7, 2014. Taiwanese protesters said they would leave on April 10. (Mandy Cheng/AFP/Getty Images)
China

Taiwan student leaders announced Monday that they would put an end to their occupation of the Legislative Yuan, the country’s parliament, at 6 p.m. on April 10, after three weeks of protest against a trade pact with China. President Ma Ying-jeou welcomed the decision but insists on his intention to pass the trade deal soon.

Chen said that ending the occupation is not an end the student movement. “The student movement has accumulated enough power to turn into a national movement,” Chen said, “It’s the best time now to walk out of the Legislative Yuan and spread to different places in the country.”

Several appeals to the government still stand, Chen said: an oversight bill that would supervise the relationship with China, including the trade pact, following the principle of civil participation and open information; secondly, the demand that the trade pact not pass before that oversight bill is brought into law.

It was this promise that legislative speaker Wang Jin-pyng gave Sunday, before the students’ concession. As a member of the ruling Nationalist party, Wang’s surprise move attracted strong opponents from party legislators, who called it a “betrayal.”

The students also continue to ask the Legislative Yuan to withdraw the trade pact and restart negotiations.

President Ma Ying-jeou was positive about the students’ plans to leave. He insisted that he would attempt to pass the pact as soon as possible, however, and said that the oversight bill could be done in parallel.

“Speaker Wang’s opinion is not in opposition to the government’s … I appeal to the legislature to review the trade pact in the shortest period,” Ma said in a press conference.

The protesting students will leave the Legislative Yuan at 6:00 p.m. Thursday, and have invited people from around Taiwan to gather in front of the building to welcome them as they exit.