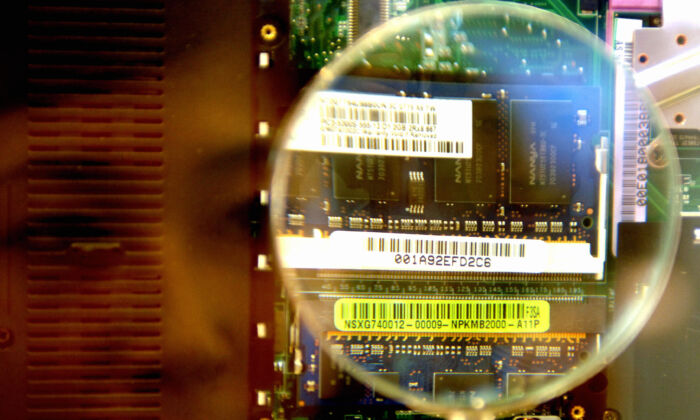 A woman looks through a magnifier to see the RAM from a notebook during the semi-tech show in Taipei, Taiwan on 10 May, 2007. (Sam Yeh/AFP via Getty Images)
Tech Competition

The Mainland Affairs Council (MAC) is proposing a revision to an existing law governing China relations that would require technical personnel receiving government money to seek permission before going to China, according to a Wednesday statement.

The amendment is to protect the “national core technology” from Beijing-backed industrial espionage. Those who breach the law would be fined up to $360,555.

Taiwan is home to some of the world’s largest and most advanced semiconductor plants.

Nowadays, be it washing machines, electronic devices, or fighter jets, millions of products depend on computer microchips, also known as semiconductors, to power electronics.

The prolonged global computer chip shortage during the COVID-19 pandemic has spotlighted the economic and strategic importance of the de facto independent country in chipmaking.

China claims Taiwan as its own and vows to take it by force if necessary.

Beijing’s aggression is not limited to maneuvers and economic coercion, but includes acquiring the world-leading chipmaking technology from Taiwan.

“Cases of China’s attempts to steal industrial technology from Taiwan occur frequently,” the MAC said in the statement.

Cases emerged in 2014, and intensified in 2018, as U.S.-China trade tensions escalated. Engineers at Taiwanese chipmaker foundries stole technology with the intention of providing it to mainland China, and many more relocated to China, which became a major concern for Taiwanese tech companies.

In August 2018, a Taiwanese maker of DRAM (dynamic random-access memory) chips lost 48 of its senior experts to China in less than two years, according to Taiwan’s Central News Agency.

DRAMs are semiconductor cells within digital products that store data.

This April, lawmakers from the ruling Party in Taiwan proposed amending the commercial secrets law to widen the scope of what is considered a secret and to toughen penalties.

According to the Wednesday statement, the council said it will seek help from the technology ministry and further amend the regulations.

Taiwan’s parliament will need to pass the revisions.