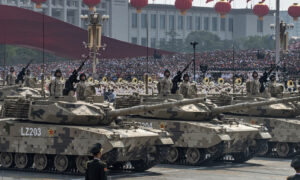 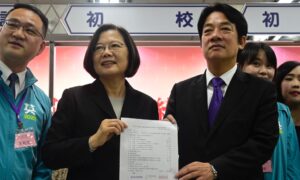 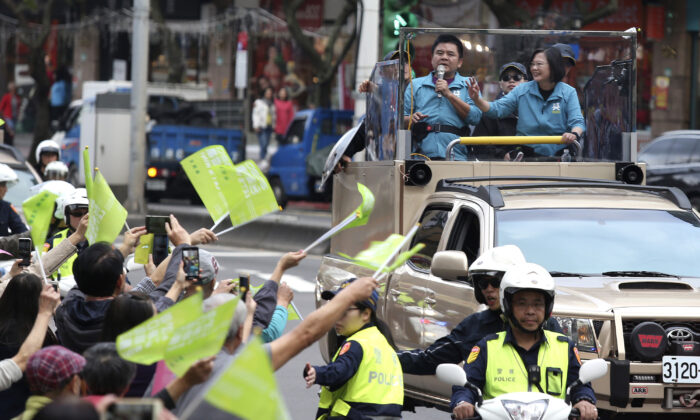 TAIPEI, Taiwan—Taiwan’s President Tsai Ing-wen urged her supporters to turn out at the polls in force as campaigning for national elections wrapped up on Jan. 10 with last minute stumping and rousing rallies before this weekend’s election.

“We all must go home and vote!” she said. “Do not doubt yourselves. Our path is the right one!” she said while out campaigning.

Tsai, of the independence-leaning Democratic Progressive Party, was leading by a comfortable margin in most polls and was expected to triumph on Saturday over her Nationalist Party rival, Han Kuo-yu, and James Soong, of the smaller People First Party.

The Nationalists, however, were hoping to erode the DPP’s 68-seat majority in the 113-member legislature, where Nationalists hold 35 seats. Minor parties and independents hold the rest of the seats.

Taiwan elections are lively events that generally revolve around economic, public welfare and social justice issues, though China’s threat to annex the self-governing island by force always looms large in the background.

After losing badly in local elections 14 months ago, Tsai’s party has gotten a boost from hostile words and actions from Beijing. Months of sometimes violent pro-democracy protests in Hong Kong have helped convince many in Taiwan that Beijing’s “one country, two systems” formula for governing that city is untenable.

Still it is likely that further deadlock and heightened pressure from China will result if Tsai wins a second, four-year term.

After a day of patrolling markets and city streets appealing for votes, Tsai’s supporters gathered on Friday evening for rousing campaign rallies.

Tsai’s campaign has focused on the need to protect the island’s thriving democracy, which she says should be a model for Hong Kong, rather than the other way around.

A rebound in Taiwan’s high-tech economy has also helped Tsai’s cause. Stock prices have remained robust and wages have risen slightly, partly thanks to Taiwanese exporters relocating from China to cut costs and avoid the bruising effects of the U.S.-China trade war.

In the southern port city of Kaohsiung on Friday, thousands of fans of her rival Han, who is the city’s mayor, waved red and blue Taiwan flags, blew horns and chanted their support. Soong of the smaller People First Party, also planned a rally.

Han has slumped in the polls following a series of gaffes and allegations of shady financial dealings. He has clung to a pro-China policy despite widespread distrust of the mainland and the backlash against Beijing’s handling of the Hong Kong protests.

Beijing has taken an especially hard-line against Tsai since her 2016 inauguration, infuriated by her refusal to endorse its claim that Taiwan and the mainland belong to a single China.

Beijing cut off all formal ties with her government, restricted visits by Chinese tourists, excluded Taiwan’s representatives from international gatherings and peeled away more of the island’s dwindling diplomatic allies, leaving it with just 15.

Stepping up its threats, Beijing has in recent months held military exercises across the Taiwan Strait, sailed both of its aircraft carriers through the waterway that divides Taiwan from the mainland and flown air patrols around the island.

However, in an apparent effort to avoid antagonizing voters, Chinese leader Xi Jinping didn’t renew the threat of using force against Taiwan during his annual New Year’s Eve address, even though he reiterated China’s firm opposition to Taiwan’s formal independence. Chinese state media have been notably silent on the election.

Analysts say the low-key approach masks a more subtle campaign to back Han and Nationalist candidates for the legislature through media manipulation and social media campaigns.

Seeking to scupper such attempts, the legislature last month passed an anti-infiltration bill laying out fines and prison sentences for those seeking to manipulate Taiwan’s political system on behalf of China or other foreign powers.

In comments to the media on Thursday, Taiwan’s Foreign Minister Joseph Wu said Tsai’s government doesn’t plan to rock the boat with a formal declaration of independence.

“Maintaining the status quo is in the best interest of everyone concerned. We will not provoke any conflict with China, but we are absolutely determined to defend Taiwan’s democracy,” Wu said.

By Taijing Wu and Elaine Kurtenbach