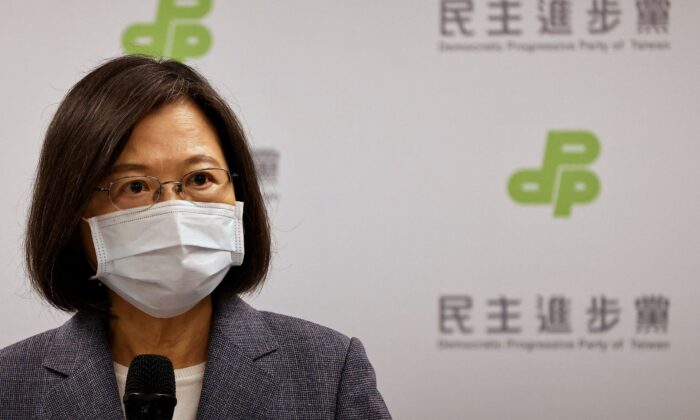 Taiwanese President Tsai Ing-wen announces her resignation as Democratic Progressive Party chair to take responsibility for the party's performance in the local elections in Taipei, Taiwan, on Nov. 26, 2022. (Ann Wang/Reuters)
By Kelly Song

After Taiwan’s ruling Democratic Progressive Party (DPP) lost many seats in the “nine-in-one” local election held on Nov. 26, Taiwan President Tsai Ing-wen resigned as head of the DPP, but will remain the president of Taiwan until her term ends in 2024.

In the local-issues-focused election, candidates from the DPP, the opposition Nationalist Party or Kuomintang (KMT), and the relatively new Taiwan People’s Party competed for mayors, city council members, and other local leaders in all 13 counties and in nine cities. The KMT won 13 cities and counties, including Taipei, the capital city. The DPP only won five cities and counties.

Concerns about threats from China, which claims the self-ruled island as its own, were overshadowed by local issues, such as air pollution in the central city of Taichung, traffic snarls in Taipei, and the COVID-19 vaccine purchasing strategies.

Following the tradition after a major loss, Tsai announced her resignation as the head of the DPP on the evening of Nov. 26.

“I must shoulder all the responsibility,” she said. “Faced with a result like this, there are many areas that we must deeply review.”

Tsai stated that maintaining the stability and ensuring the safety and development of Taiwan remains the mission.

‘Protect the Republic of China, Democracy, and Freedom’

Candidates from the KMT won the mayoral seat in Taipei, Taiwan’s capital, as well as in Taoyuan, Taichung, and New Taipei city.

“I will let the world see Taipei’s greatness,” Chiang Wan-an, the new Taipei mayor, said in a rally on the evening of Nov. 26.

Chen Shih-chung, the mayoral candidate from the DPP, congratulated the new mayor of Taipei and said that love for the city transcends party politics. “We will support Chiang Wan-an and together make Taipei a better city,” he said

The head of the KMT, Eric Chu, said that the Nationalist Party will also safeguard freedom in Taiwan. “We will continue to protect the Republic of China, protect democracy and freedom,” he said.

Epoch Times reporter Zhang Ting and The Associated Press contributed to this report.