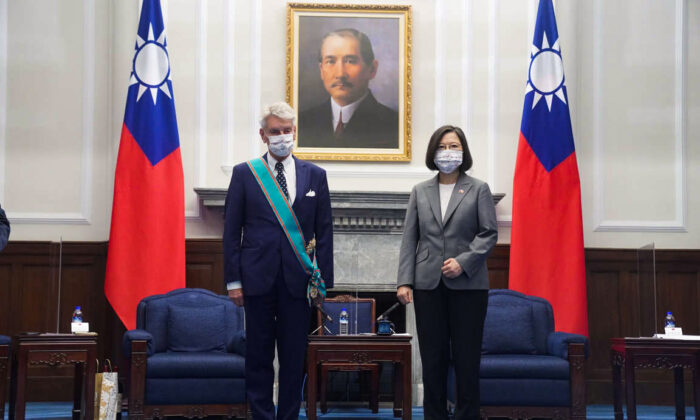 Taiwan President Tsai Ing-Wen met with four French senators and a former Australian PM in recent days as Beijing’s air incursions near Taiwan surged for a week since Oct. 1.

On Oct. 7, President Tsai Ing-Wen met the French delegation in Taipei, Reuters reported. She thanked them for the visit amid Beijing’s mounting pressure on the island.

“We will continue to fulfill our responsibilities as a member of the international community to ensure peace and stability in the Indo-Pacific region,” Tsai said.

Former defense minister Alain Richard led the delegation, who arrived in Taiwan on Oct. 6 despite strong opposition from Beijing. Richard said the French government was willing “to make Taiwan’s presence and participation recognized in the United Nations’ specialized organizations.”

On the same day, Tsai welcomed former Australian leader Tony Abbott at the presidential office, according to AP.

Abbott said he supported Taiwan’s bid to join the Comprehensive and Progressive Agreement for Trans-Pacific Partnership, sending a strong signal of democracies standing shoulder to shoulder with Taiwan. The former prime minister made clear he supported Taiwan as it stands against the threat from the Chinese Communist Party (CCP), which challenges the self-ruled democracy on an almost daily basis.

Taiwan economist Wu Chia-Lung told The Epoch Times on Oct. 6 that the French senators’ trip indicated France’s intention of joining the Indo-Pacific strategy, which the U.K. had already entered.

Wu believed France would return to Asia just as neighboring Britain has. He expects France will make further deployments in the region, as one third of world trade depends on sea travel through the Indian Ocean.

Wu said that the move by the French senators showed France took the South and East China Seas, the Taiwan Strait, and maritime transportation routes in the region seriously.

Moreover, Wu noted, the trip of the senators showed France as well as Japan had the “guts” to defy communist China, which was of political significance in the international community.

Feng said that France was also reluctant to continue its engagement with the Chinese Communist Party (CCP) because the CCP directly angered the French by its “wolf warrior” diplomacy over the issues of Hong Kong and Xinjiang. Additionally, dwindling investment returns in China made the French more determined to establish closer ties with like-minded democracies.

Feng stressed that strategically, the Chinese regime relied heavily on nationalism as its most crucial ideological cornerstone. It would highlight its tough stance on Taiwan as a display for Chinese citizens, even if it including offending its neighbors and beyond, to maintain the legitimacy of its delicate regime.

Wu added the CCP was purposefully making a “don’t-offend-me” posture toward Taiwan with the air incursions, to blanket its domestic problems.

Luo Ya and Fang Xiao contributed to this report.