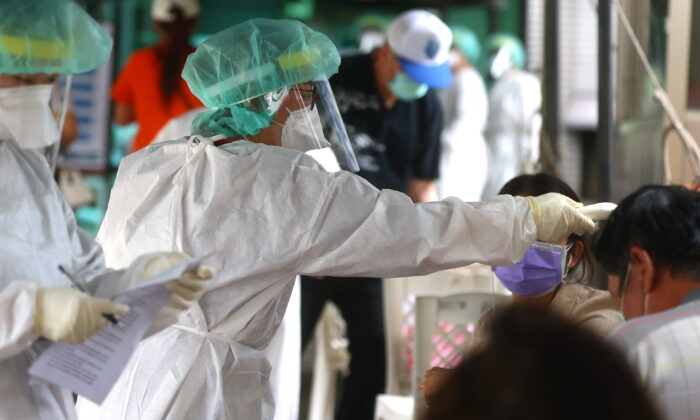 A health care frontline worker prepares people to get their rapid test following a surge of coronavirus infections in Taipei, Taiwan, on May 17, 2021. (Ann Wang/Reuters)
Asia & Pacific

Taiwanese Premier Su Tseng-chang on Sunday said there is no reason to fear the highly transmissible Omicron variant due to its milder severity, following a spike in domestic coronavirus infections fueled by the new variant.

Speaking to reporters at Taiwan’s Central Epidemic Command Center (CECC), Su urged residents not to be afraid of the new variant, but rather “stay vigilant and prudent” by getting vaccinated, Taipei Times reported.

Su also called on residents to get their booster shots as soon as they were eligible.

“The Omicron variant spreads very fast, so all of a sudden, most of the cases reported around the world are Omicron cases,” Su said.

“Its rapid spread is the variant’s charateristic, but most infected people have mild symptoms, or even no symptoms, which is also the case in Taiwan.”

Taiwan reported 130 new infections on Saturday, 82 of which were local transmissions. Deputy Director-General of Taiwan Centers for Disease Control (CDC), Philip Lo, said local infections in the country totaled 166, but none of them resulted in severe symptoms.

Of the total domestic transmissions, 46 cases are asymptomatic, and 120 have had mild symptoms such as a sore throat, cough, fever, and runny nose, Lo said, Taiwan News reported.

There have been 461 Omicron cases detected in Taiwan so far.

Despite the increase in cases, Taiwan’s coronavirus alert level remains at 2, with several restrictions in place to limit the spread, such as a ban on eating and drinking on public transport and limits on the number of people visiting temples.

Health Minister Chen Shih-chung said that rapid testing and contact tracing will also be enhanced to reach the largest number of possible contacts. Enforcement for registration at eateries will also be tightened.

According to Chen, the government may need to raise the alert level to 3 and tighten measures in a “step-by-step” approach to prevent Omicron from spreading further, which could overwhelm the country’s medical system.

Taiwan’s pursuit of “zero COVID” seems to be impossible now that local transmissions have increased, Chen said, adding that people may have to learn to coexist with the virus.