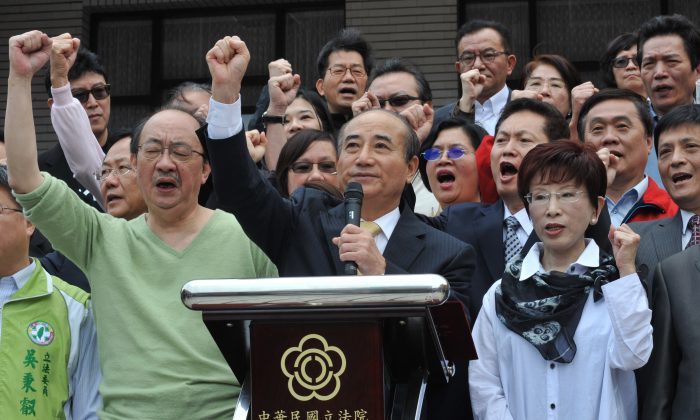 Wang Jin-pyng, the speaker of the Taiwanese Legislative Yuan, on April 6 appeared before students who have been occupying it for the last three weeks, promising them that he would not allow a controversial trade pact with China to proceed before other legislation, which monitors relations with China, is passed.

It was the first time that a senior Nationalist Party politician has spoken to the students since they took over the legislative chambers on March 18, and represented a general agreement with their demands. The move was also a shock to the Nationalist Party, of which Wang is a member. Alex Hrong-tai Fai, a Nationalist Party legislator, said he felt “betrayed” by Wang’s surprise move.

Student leaders said they accepted Wang’s promise and would discuss the next steps.

Wang Jin-pyng, together with legislators of both Nationalist and Democratic Progressive parties, visited the students inside the Legislative Yuan, and then gave a speech outside. It was Wang’s first public remarks about the trade pact in the 20 days of student occupation of the congress, according to Taiwanese media Next TV.

Wang is the head of the legislature and is considered a political adversary of Ma Ying-jeou, the president. It was Wang’s initial decision, or failure to act, that led to the student occupation of the legislative chambers.

In the speech on Sunday, Wang said that no review of the trade agreement would be made before the completion of a bill that would establish an oversight body of the China-Taiwan relationship.

“Keep charging ahead with your ideals,” he told the students, at the same time exhorting them to leave the legislature and return to their university classes.

“We felt good will from President Wang,” student leader Lin Fei-fan told Taiwanese media. “We will discuss what to do the next.”

Another student leader, Chen Wei-ting, in interviews with the media contrasted Wang’s conciliatory approach to the harder line by President Ma Ying-jeou.

Chen said passing an oversight bill before reviewing the trade pact is a basic principle advocated by the students, who are concerned with the contents of the bill, and ongoing review of its impacts if it is passed.

Nationalist Party legislators hosted a press conference in the afternoon saying that the party caucus was not informed of Wang’s speech ahead of time. Some members reported being “extremely shocked” by it.

“The oversight bill and the review of the trade pact can be done together at the same time,” said Lin Hung-chih, a Nationalist legislator, at the conference, according to Next TV.

“I feel the whole party was betrayed by you,” said Alex Hrong-ta Fai at the press conference, as though he were speaking to Wang Jin-pyng.