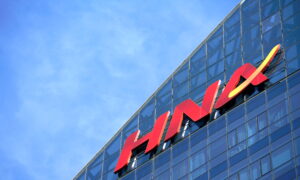 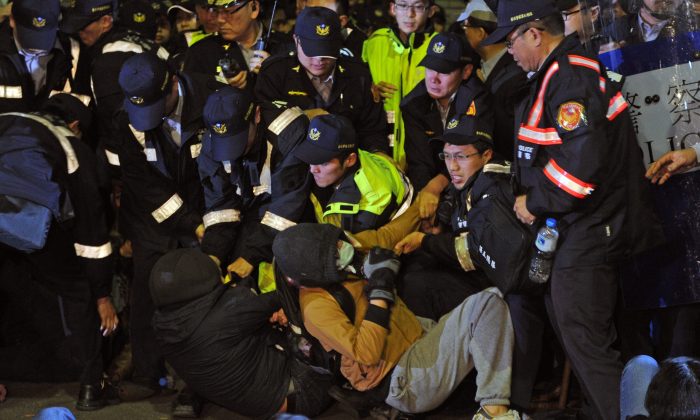 Police remove students from the ground at the Executive Yuan in Taipei on early March 24, 2014. Clashes between the police and students injured dozens of students. (SAM YEH/AFP/Getty Images)
China

Taiwanese authorities dispatched large numbers of riot police to the government’s executive chambers at midnight on March 23, aiming to disperse the student protesters that had broken into the compound hours earlier.

Pictures of students with bloodied faces and clothing quickly emerged on the Internet, showing that the previous amity between police and protesters had broken down, and that violence was now part of the strategies being used by the Taiwanese government to prevent the students gaining further ground.

The students’ nighttime raid on the Executive Yuan building in Taiwan was the next step attempted by the students, who two days ago commandeered the Legislative Yuan, Taiwan’s parliament.

Not all of them supported it, though. In an email, the student activists wrote: “The developments at the Executive Yuan are the result of a spontaneous gathering by students from around the country in support of the Occupy Legislature movement, and the developments, as well as the statement released earlier, do not necessarily represent the views of the students currently in the legislature.”

A three hour YouTube video of the siege showed them clambering into the windows of the building, while what appeared to be thousands loitered and chanted outside, others pushing their way through the entrance.

Protesters are furious with the government’s attempt, led by President Ma Ying-jeou, to expedite the passage of hotly disputed trade legislation with China. The trade deal would undermine Taiwan’s sovereignty and independence and give communist China too much economic influence over the small island country, protesters say.

When a lawmaker with the Nationalist Party, currently in power, attempted to proceed on the trade pact without a clause-by-clause deliberation, young people around Taiwan revolted.

As police were attempting to disperse them from the Executive Yuan in the early hours of March 24, many students began dropping to the ground and lying there. They yelled “peace,” while others took photographs of the police attempts to dislodge them.

Police formed a human wall with their shields, and began ripping away the supine protesters, while bashing a few of them with their shields. Students linked their arms while lying on the ground, hampering police efforts.

YouTube videos also emerged showing some police violently lashing out at students with their clubs. “Police beat people!” onlookers yelled out, as a young riot officer charged at and clubbed several unarmed protesters in the face.

By 1 a.m., the police had injured at least 52 students in their attempts to disperse them, reported Apple Daily, a major newspaper in Taiwan.

As the conflict dragged on more police were dispatched, while more Taiwanese gathered outside of the Executive Yuan to support the students. More than 10,000 people had turned out by 3:30 a.m., according to NextTV’s live report.

Trucks with water cannons were later sent in, and at 4:30 a.m. were turned on against some pockets of students.

Taiwanese riot police were still attempting to remove the students six hours after they first began.

The country’s president, Ma Ying-jeou, has canceled his Monday agenda due to the conflict. He had previously rejected the student demands—to rescind the trade agreement and apologize—which seemed partly to prompt the attempt to break into the Executive Yuan.

The government overall is far from united in its response to the protests. Some city mayors have vowed that no police from their city will be allowed to confront the students. Wang Jin-pyng, the speaker of the Legislative Yuan, Taiwan’s parliament which has been occupied by students for the last three days, is a political opponent of Ma Ying-jeou.

Wang made the decision to allow them to occupy the chambers, and he has made no suggestion that he will attempt to remove them any time soon.