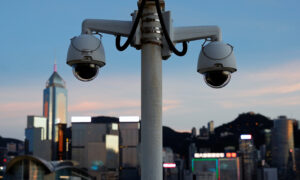 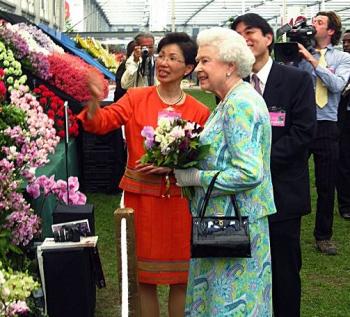 Taiwanese orchids have made an impressive debut at the Chelsea Flower Show in London, winning the silver medal and attracting the Queen’s attention.

Sponsored by the United Kingdom’s Royal Horticultural Society, the Chelsea Flower Show, officially the Great Spring Show, is a garden show held each year on five days in May on the grounds of the Royal Hospital Chelsea. The show is known for its stringent quality requirements. The 2010 show invited more than 600 top florists and horticulturists from around the world.

Queen Elizabeth II was among the 160,000 visitors attracted to this most prestigious international flower show. The Queen stayed for five minutes at the Taiwan booth and wondered at the delicacy of the Taiwanese orchids. She happily received a pot of Phalaenopsis Fortune Saltzman a surprise gift from Taiwan's top U.K. representative Katharine S. Y. Chang, according to a report by the Central News Agency on May 26.

The Taiwan booth, Orchids in the Art World, was designed by Taiwanese florist Chen Hsiu-wei.  Chen represented the beautiful island scenery of Taiwan by featuring the small white variety Phalaenopsis and the large white variety V3,.

Orchids, officially known as Orchidaceae, are believed to be the second largest family of flowering plants with between 21,950 and 26,049 species. Taiwan’s sunny and humid subtropical weather is perfect for growing orchids, and the frequent orchid competitions and events have encouraged widespread planting.

Over the years Taiwan has established its worldwide reputation as the Orchid Kingdom. In 2009, Taiwan’s orchid exportation revenue reached US$62.68 million, a 20% increase over 2008.

Chen, who has won multiple international horticultural awards, said she was hoping to win the gold medal at this show, but second place was a great honor and only inspires her to do even better next time.

The show also introduced to the public, Taiwanese artist Huang Yun-ting who exhibited her unique floral sculptures made from paper clay. Huang had been invited to participate by the show’s manager, Stephen Bennett, who was impressed by her exquisite work when he had visited Taiwan.