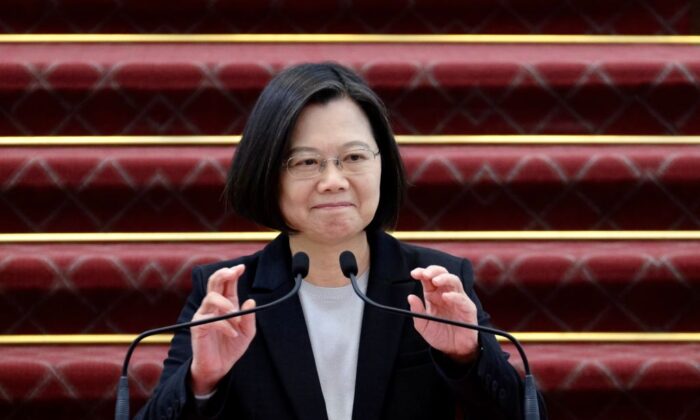 TAIPEI, Taiwan—Officials took turns on July 7 criticizing Beijing and the Hong Kong government, after the latter announced details about the newly-implemented national security law on Monday.

Speaking to reporters on Tuesday, Taiwan President Tsai Ing-wen raised concerns that a provision requiring Taiwan organizations and individuals to give up information to Hong Kong police would violate Taiwan citizens’ rights.

“We will keep a close eye on the implementation of Hong Kong’s national security law. When necessary, we will issue warnings or guidance for our citizens and relevant organizations to prevent them from being harmed by the law,” said Tsai.

She added that if the security law harms Taiwan’s interests, the island would consider countermeasures.

Hong Kong’s latest move drew bipartisan criticism. The opposition party, the Kuomintang (KMT), issued a statement Tuesday night, noting that Taiwan “does not have any obligation to work with the Hong Kong government in its politically [motivated] criminal Investigation and crime prevention.”

Beijing formally enacted the law after ceremonial votes on June 30. The law criminalizes individuals for any acts of subversion, secession, terrorism, and collusion with foreign forces against the Chinese Communist Party (CCP), with maximum penalties of life imprisonment.

On Monday night, the Hong Kong government gazetted details of Article 43 of the law, which includes police being allowed to search private properties without a warrant, and requiring internet service providers to remove messages from their platforms.

Failure to provide such information to Hong Kong police could lead to organizations and individuals being prosecuted and convicted under the security law, and be fined HK$100,000 (about $12,900) or spend six months in prison.

“Taiwan is a sovereign, independent country. We will not be China’s accomplice. We will protect the safety of our citizens,” said Taiwan Premier Su Tseng-chang while speaking to reporters on Tuesday.

Su elaborated that Beijing’s decision to adopt the law in Hong Kong showed the world how it has turned its back on promises made to Hong Kong.

Beijing promised to preserve Hong Kong’s autonomy for 50 years after the city’s transfer of sovereignty from Britain to China in 1997, under a framework called “one country, two systems.”

MAC said that the details about Article 43 were “vaguely defined,” creating “panic” among Taiwanese currently working in Hong Kong and “killing” any normal exchanges between Taiwan and Hong Kong.

“We sternly warn Beijing and the Hong Kong government not to overstep their boundaries to violate human rights and hurt the lawful interests of our groups and institutes in Hong Kong,” MAC stated.

In an interview with the local branch of sister media NTD, Liao explained that people or organizations in Taiwan could violate the law if they decide to pass on information to Hong Kong, even if the request comes from Hong Kong police.

He recommended the Taiwanese government be aggressive in passing Magnitsky Act-style legislation to punish officials in Hong Kong who have violated human rights.