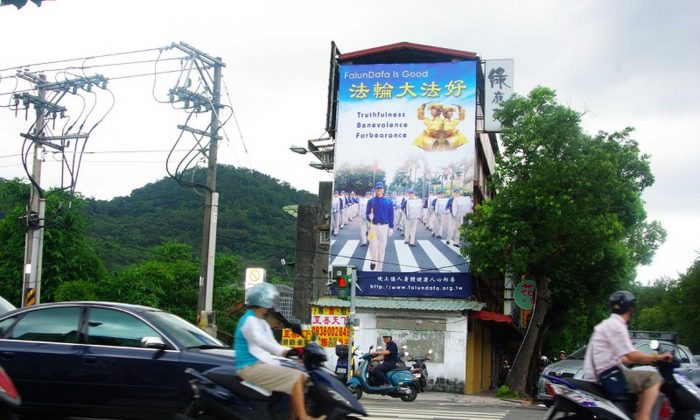 A Falun Gong billboard in Taipei is pictured. The Taiwan Tourism Bureau has withdrawn a request it sent to city governments asking that such billboards be removed. (Epoch Times)
Asia & Pacific

Taiwan’s Tourism Bureau has withdrawn the request it sent on Sept. 26 to city governments around the country asking that all billboards about the Falun Gong spiritual practice be removed. The Bureau’s deputy director-general said the order was a “rookie mistake,” according to local media.

Falun Gong is a Chinese spiritual practice, consisting of exercises and meditation, that is persecuted heavily in the mainland, and which is practiced freely in Taiwan. Practitioners on the small island nation have taken advantage of the booming tourism industry from China to put up billboards at tourist sites, demonstrating to mainlanders that their practice is peaceful, healthy, and wrongfully persecuted – not the nefarious political group bent on China’s destruction as depicted in Communist Party propaganda.

The response to the Tourism Bureau’s request, dated Sept. 26, was swift: lawmakers and intellectuals in Taiwan, perpetually wary of the encroaching presence of the Chinese Communist Party in their own country, were furious at the obvious attempt to restrict freedom of speech, a trait that the Taiwanese are proud of.

Tien Chiu-chin, a legislator with the opposition Democratic Progressive Party, wondered what the Tourism Bureau had to do with the content of billboards in Taipei. “It’s extremely abominable,” she said of the attempted restriction.

Chen Ting-fei, another Democratic Progressive Party legislator, said that the government of Ma Ying-jeou, who heads the Nationalist Party, should be wary about catering to the Chinese communist regime and its anti-democratic demands, in an interview with Epoch Times.

Their views were echoed by some local government officials; Chang Ch’u-lung, a borough chief in Taichung, a city in the south, thought the document was “junk” when he received it, because Falun Gong is a peaceful civil group in Taiwan, and the government had no place in suppressing its rights, he said in an interview.

After these views were aired and lively press conferences were held, the deputy director-general of the Tourism Bureau, Chang Hsi-tsung, on Oct. 22 disavowed the order as a “rookie mistake” by a new official, according to the English-language Taiwanese newspaper Taipei Times. He said he would have a new order next week.

Flora Chang, a Falun Gong representative and professor at National Taiwan University, told the newspaper: “It was the most serious humiliation for Falun Gong and its practitioners. If this is not fascism, then what is?”