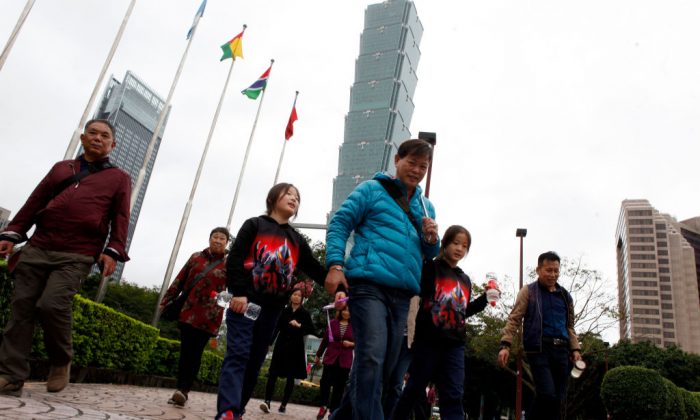 China’s Ministry of Culture and Tourism made the announcement on its website on July 31, saying that the suspension would apply to Chinese citizens in 47 cities, effective on Aug. 1. This means that residents in those cities can only visit Taiwan as part of a tour group.

The ministry did not provide specifics as to why it made the decision, merely stating that it was due to “current cross-strait relations.”

The relationship between China and Taiwan has been rocky. Though the island is a de-facto nation with its own democratically-elected government, Beijing considers it a renegade province and has never renounced the use of military force to unite the island with the mainland.

“2020 is coming. The Taiwan island is getting raucous. Under such conditions, it is more risky for mainland Chinese to travel to Taiwan on individual travel permits,” CCTV wrote, referring to Taiwan’s upcoming presidential election in January next year.

According to data from Taiwan’s Tourism Bureau, over 1.677 million mainland Chinese people visited Taiwan in the first six months of this year, up about 30 percent from a year earlier. And 60 percent of Chinese individual visitors to the island are tourists, while the rest are on business trips or visiting for other purposes.

Beijing’s motives were explained by Cho Jung-tai, chairman of Taiwan’s ruling Democratic Progressive Party, in a Facebook post whereby he explained that Beijing’s travel ban was an attempt to interfere with the 2020 election.

The ban would hurt local businesses, which would cause Taiwanese to blame the current ruling party for the economic woes and choose to support its rival, the Kuomintang (KMT), instead. The latter is known for promoting pro-Beijing agendas.

Beijing currently uses similar tactics to make business deals with city and county governments that are presided over by KMT politicians, in an attempt to sway more Taiwanese to support KMT candidates.

Lee Ming-Li, a DPP spokeswoman, said that Beijing has repeatedly used tourism as a weapon against the party since 2016—when current Taiwan President Tsai Ing-wen took office, according to Taiwneae daily newspaper the Liberty Times.

Beijing has long used tourism as a political tool. In 2017, Beijing banned group tours to South Korea after the South Korean government decided to host a U.S. anti-missile system—which the Chinese claimed would allow U.S. authorities to spy into their airspace.

In 2018, Beijing imposed a travel ban to Palau, in an attempt to pressure the South Pacific nation to cut off diplomatic ties with Taiwan.

Currently, Taiwan’s diplomatic allies have dwindled to 17, after several countries were recently pressured to switch diplomatic recognition to Beijing, including El Salvador and the Dominican Republic.

However, well-known Taiwanese writer Lee Kan, in an interview with Taiwan’s Central News Agency (CNA), said he believed Beijing’s ban was not intended to deal a blow to the DPP. Rather, Lee said that Beijing is currently under international scrutiny, particularly as protests have erupted in Hong Kong over a controversial extradition bill. China is perhaps concerned that mainland Chinese would want to seek political asylum in Taiwan. This would be embarrassing for Beijing, Lee said.

Li Jiabao, a Chinese national and college exchange student in Taiwan, was granted a six-month visa extension in early July by the Taiwanese government, allowing him to stay past his student visa’s expiration date, according to Taiwanese media. He is seeking political asylum in Taiwan, after he received death threats for openly criticizing the Chinese regime on the internet.