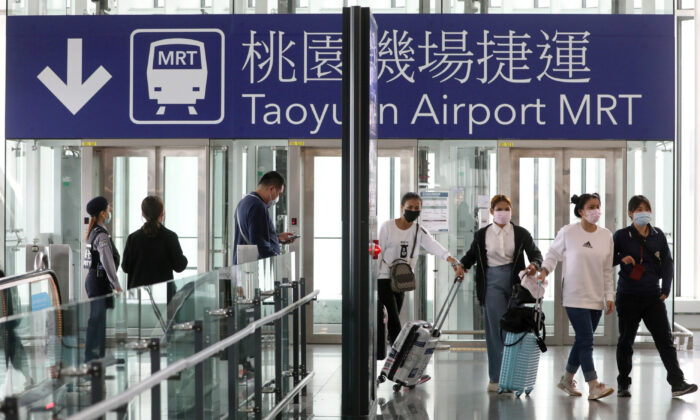 Travelers arrive at the airport as the Taiwanese government announced a ban for most foreigners entering the island, as part of preventive measures against coronavirus disease (COVID-19), at Taoyuan International airport in Taoyuan, Taiwan, on March 18, 2020. (Ann Wang/Reuters)
Asia & Pacific

Taiwan is mulling ending its mandatory quarantine for all arrivals in late October if the country’s COVID-19 cases drop significantly, a government official said on Thursday.

The Central Epidemic Command Center’s spokesperson, Chuang Jen-hsiang, said the quarantine rule could be lifted next month, and travelers will only need to observe seven days of self-conducted epidemic prevention measures.

The government will conduct an “extensive analysis” of the pandemic before deciding to reopen borders, Chuang said, adding that the reopening could occur later in October if the number of cases drops significantly, Focus Taiwan reported.

However, Chuang warned that reopening borders could result in Taiwan dealing with the outbreak and the upcoming flu. He noted that infections have been slowing despite the increase in cases in Taiwan.

Taiwanese Premier Su Tseng-chang said the country’s COVID-19 cases were gradually increasing, with 41,430 new cases reported on Friday, but the increase was in line with the government’s expectations.

“If during the [next] two weeks it can be monitored and predictions are as we first had them, if [cases] gradually rise and then slow down, then we can open up earlier,” Su told reporters.

Taiwan this week resumed visa-free entry for visitors from countries including the United States and Canada, though visitors are still required to undergo a COVID-19 test upon arrival, as does the current weekly cap of 50,000 arrivals.

The self-ruled nation has already ended the requirement for pre-departure negative tests.

The Taiwanese government on Wednesday approved new guidelines for tour groups but they will not be implemented until the outbreak has peaked, Taiwan News reported. Taiwan’s ban on overseas tour groups remained in effect, a Tourism Bureau official stated.

Taiwan has reported more than 5.7 million COVID-19 cases since the beginning of the year, driven by the highly infectious Omicron variant. With more than 99 percent of those showing mild or no symptoms, the government has relaxed restrictions in its “new Taiwan model.”

The government has kept Taiwan’s entry and quarantine rules in place as large parts of the rest of Asia have relaxed or lifted them completely, though in June it cut the number of days spent in isolation for arrivals to three from seven previously.