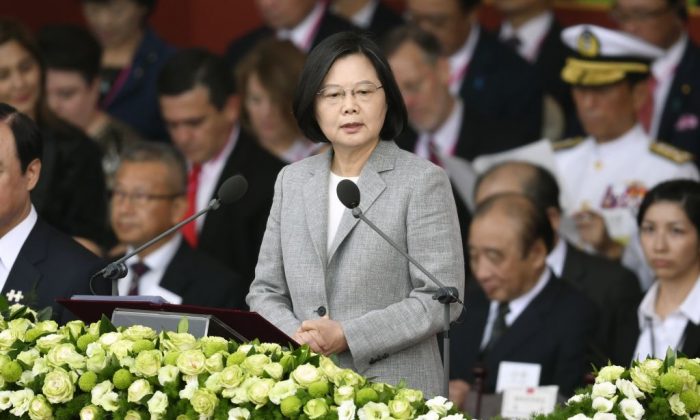 TAIPEI, Taiwan—In less than a week, Taiwan has lost two diplomatic allies to Beijing, with the latest being the South Pacific nation of Kiribati.

“They have chosen to give up a real friend and chosen to become a pawn of China. I think this is a huge mistake,” said Taiwan President Tsai Ing-wen, commenting on Kiribati’s decision to switch diplomatic recognition to Beijing during a Sept. 20 press conference.

Despite Taiwan being a self-ruled island with its own democratically-elected government, Beijing considers Taiwan a renegade province that should be united with the mainland, with military force if necessary.

The Chinese regime has thus employed different tactics to diminish Taiwan’s legitimacy as a state, such as by preventing Taiwanese officials from taking part in international diplomatic events.

Since 2016, Beijing has focused on luring away the island’s allies—which formally recognize Taiwan as a sovereign state—by offering them Chinese investments and loans.

China’s actions to bully Taiwan through poaching our diplomatic allies are deeply troubling. We are disappointed by the decisions by the #SolomonIslands & #Kiribati governments to sever ties with Taiwan. I hope like-minded countries will stand with Taiwan in this difficult time. pic.twitter.com/ycENKtJcOl

Just before Tsai’s remarks on Friday, Taiwan’s foreign minister Joseph Wu also held a press conference, in which he said Beijing had promised “to provide full funds for the procurement of several airplanes and commercial ferries, thus luring Kiribati into switching diplomatic relations.”

Citing unnamed sources, Taiwanese local broadcaster SETN reported that Kiribati demanded that Taiwan foot the bill for its desire to procure a Boeing 737 plane, which cost about $70 million. Taiwan rejected the demand because Kiribati only has one airport big enough for the plane; thus, it is unlikely to be used for commercial purposes and would instead be for personal use, such as a private jet for Kiribati’s president Taneti Mamau, according to the media report.

Taiwan and Kiribati established diplomatic ties in November 2003. Since then, Taiwan has assisted the South Pacific nation with infrastructure projects and providing locals with job training and study programs, according to CNA.

Tsai explained that Beijing’s latest persuasion tactics directed at the two Pacific allies was for the purpose of meddling with the island’s upcoming elections, about 100 days away.

Taiwan will hold its 15th presidential election on Jan. 11, 2020. On the same day, all 113 seats of the island’s parliament (known as the Legislative Yuan) are also up for election.

We regret to announce the end of #Taiwan‘s diplomatic ties with #Kiribati. The government stands strong in resisting #China’s campaign of coercion, interference in the elections & imposition of “one country, two systems” on the 23 million people. Read on: https://t.co/W6jNqWVXkb.

“Based on the information we have obtained, before the elections, China will continue to engage in many more suppressive activities [against Taiwan],” she added.

Tsai—a member of the Democratic Progressive Party (DPP), which traditionally advocates for the island to formally declare independence from the mainland—is running for reelection. She is currently ahead in local polls, with a small lead over Han Kuo-yu, presidential nominee for the DPP’s main opposition party, the Kuomintang (KMT), which has a pro-Beijing platform.

By reducing the number of Taiwan allies and putting pressure on the DPP, Beijing is effectively swaying public opinion against DPP candidates and for the KMT.

“They (Beijing) are using these suppressive tactics to tell Taiwanese people that we cannot buy fighter jets, we cannot support Hong Kong, and we can only choose a president that kowtows to China,” Tsai added.

Tsai has been vocal in her support for ongoing protests in Hong Kong, which began over an extradition bill that many feared would endanger the territory’s autonomy from mainland China. In August, the U.S. government, a key arms supplier for Taiwan, agreed to sell to the island 66 F-16V fighter jets.

Tsai concluded her brief press conference by saying that Taiwan would never accept Beijing’s proposal to unite Taiwan with the mainland under the “one country, two systems” model—currently adopted in Hong Kong.

Beijing’s geopolitical ambitions include offering developing countries loans and grants, while asking them to repay debts via access to natural resources, as in the case of Venezuela and Angola, where both are paying off loans by supplying China with oil.

This may also be the case with the Solomon Islands, after one of China’s state-run companies struck a million-dollar deal with the island nation.

After Solomon Islands announced that it would cut ties with Taiwan, the latter’s Foreign Minister Joseph Wu, in response to Taiwanese media reports that Beijing had promised the Solomon Islands $500 million in aid if the latter switched diplomatic recognition, said that those reports were “consistent with our intelligence,” according to CNA.

Just days prior, the state-run China Railway Group announced on its website that its two subsidiaries—China Railway International Group and China Railway No. 10 Engineering Group—were awarded a construction project for the Gold Ridge mine in the Solomons, after a successful bid of $825 million.

The project, which will last until March 2034, consists of two phases. The first phase involves strip mining, which means the removal of soil and rocks overlying the gold deposits. The second phase involves building road, bridge, and hydroelectric power stations in preparation for the underground mining.

The $825 million bid was 0.78 percent of China Railway Group’s 2018 annual earnings, according to the company.

Gold Ridge Mine, located in central Guadalcanal, southeast of the island capital, Honiara, is currently owned by a local company, Goldridge Community Investment.

The mine commenced operation in 1998. In the years since, it has been forced to shut down due to social unrest and natural disasters.

Australian mineral exploration company Frontier Resources, in a technical report published in 2015, established that the Gold Ridge mine contained 3.18 million ounces of gold.